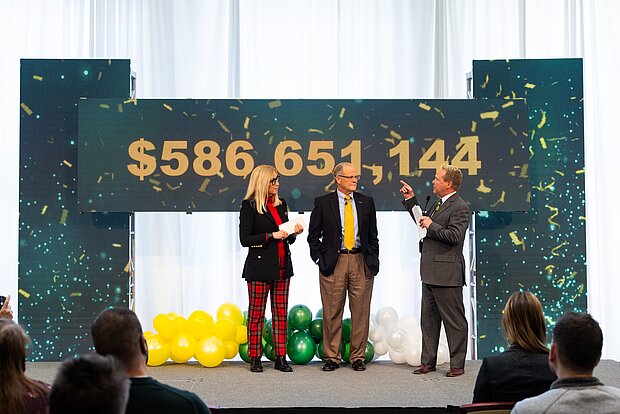 “In Our Hands: The Campaign for North Dakota State University” raised more than $586 million during the six-year comprehensive campaign, the NDSU Foundation announced Feb. 14. It is the largest higher education fundraising campaign in North Dakota history.

“Twelve years ago, I was on a campus poised to accomplish more and contribute more than any college or university in the state ever had,” NDSU President Dean L. Bresciani said. “We all shared that vision — our students shared it, our faculty and staff shared it, our alumni shared it, our corporate partners shared it, people across the country have shared that belief. What we’ve accomplished here is the biggest fundraising effort in the history of the state of North Dakota. We have done that collectively as the Bison Family.”

“This is a marking point for a new beginning for NDSU and the state of North Dakota,” Burgum said. “The Bison Family is made up of families, and it’s made up of families that generationally care about this. When people take the action of putting their time, talents, and their treasure toward an institution at a magnitude we’ve never seen before, it means something remarkable for the students who are here today and the students who are coming.”

More than 15,000 benefactors participated in the campaign, which publicly launched in October 2019 with a goal of raising $400 million over seven years, after having already secured more than $300 million during the quiet phase that began January 2016. By May 2021, the campaign reached its $400 million target 20 months ahead of schedule, and NDSU leaders decided to complete the campaign one year earlier than previously scheduled.

“This campaign was about relationship building. We reacquainted people with old relationships, we brought in new relationships, and now we are stronger than we’ve ever been,” said alumna Kristi Hanson, campaign ambassador. “Today, I am so proud to be a Bison.”

The transformational level of “In Our Hands” support from benefactors will send ripple effects long into the future for NDSU’s continued rise as a student-focused, land-grant, research university.

‘In Our Hands’ by the numbers:

• $104.7 million distributed to campus since the campaign start

“Rare is there a profession where one gets to work with really remarkable people in especially meaningful ways,” said John Glover, NDSU Foundation President and CEO. “Bison Nation has been remarkable through this campaign, and the future of NDSU is now brighter than ever.”