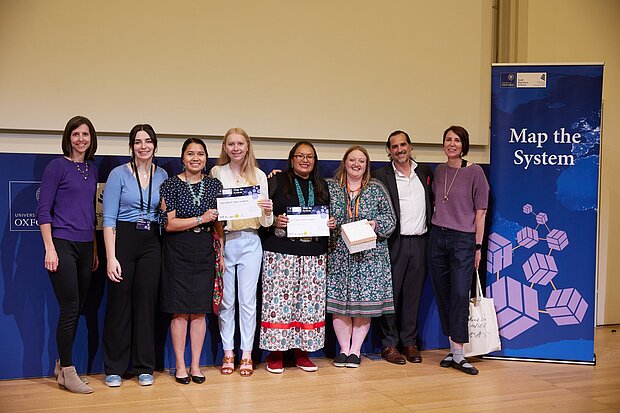 NDSU students were a part of the team that won second place and Audience Choice Award for the project, “Water is Life: Water Access in the Navajo Nation,” at the global Map the System competition sponsored by the Skoll Centre for Social Entrepreneurship at Oxford University in Oxford, England.

The team competed against 45 teams from around the world and was one of six finalists. Their project explored the struggles that the Navajo Nation’s Diné people have trying to access a clean, reliable water source. Navajo Nation spans more than 27,000 square miles across three states in the southwestern U.S.

“It was a wonderful experience to meet other teams from different universities across the world and learn about different issues impacting their communities,” said team member Leonela Nelson, a NDSU Master of Public Health student. “Our team worked hard on our project, so it was rewarding to not only place at the global level but to qualify to go. At that level, everyone is outstanding, so we are very proud to receive awards for our work.”

“The feeling of winning Audience Choice and then second place awards was ultimately gratefulness,” said Abbie Brekke, a biochemistry major at NDSU. “We were given an opportunity and a platform to present something we worked hard on and have a shared connection towards.”

The team was led by Brekke. Other team members include Nelson, University of North Dakota Master of Public Health student Taylor Billey and Teegan Nordstrom, a cognitive science major at McGill University in Montreal, Canada.

Nelson and Billey are indigenous women from Navajo Nation who live and work with water access challenges daily. Their personal experience brought direct insights important for systems-thinking, such as understanding the cultural importance of water and the impacts of settler colonialism.

“Being able to share this story and to educate others about our topic is our way of intervening in the system,” said Nelson. “Access to clean water is huge public health concern across the world so bringing awareness about challenges happening on Navajo Nation is important to share disparities happening to Indigenous People.”

Map the System challenges students to use systems-thinking to understand complex issues. Rather than a standard pitch competition, it is designed to foster the discovery process and encourage a learning-first approach to social change.

The Skoll Centre partners with universities and institutions around the world to organize the Map the System competition. NDSU hosted the regional showcase “From Problems to Possibilities” on April 20. The team won the regional competition before advancing to the global finals.

“Hearing North Dakota State University called up not only once for Audience Choice but then again in second place was a very proud moment,” said Meyer. “The students put in genuine team effort and countless hours of work to deliver a product that not only competed well, but more importantly, has the potential to really lead to positive change in the Navajo Nation.”