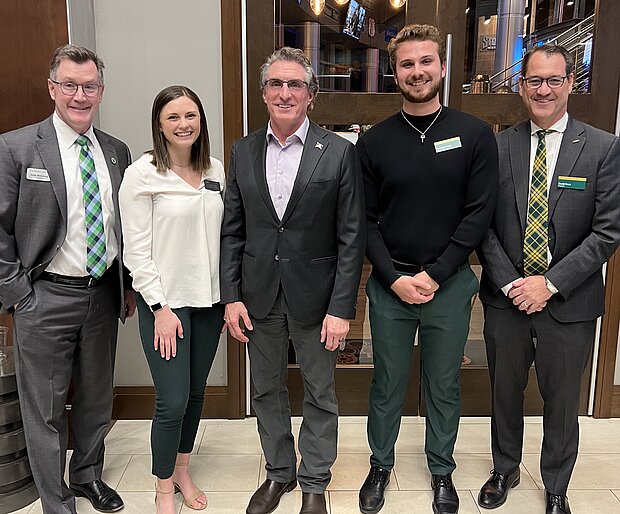 Student body presidents from NDSU and the University of North Dakota are longtime friends, first meeting 17 years ago in kindergarten in Bismarck, North Dakota.

They went on to attend the same middle school and high school. As Bismarck High School seniors, they led their class as co-student body presidents.

“We both knew we wanted to be the student class president,” said Christian Walth, NDSU student body president. “We sat down and tried to figure out who would give in and become vice president, but neither of us would budge. Faith finally looked at me excitedly and said, ‘Let’s both be presidents, co-presidents!’ We ended up earning the positions and leading together.”

Now the two are seniors in college and leading their respective student bodies. They have used the leadership skills learned during student government in high school and college to help them succeed in and out of the classroom.

“Learning that we both would be in similar positions was both unexpected and relieving,” said Faith Wahl, UND student body president. “I don’t think either of us anticipated us both ending up in this position, but it’s been a great way to collaborate on different projects and support each other in our positions. I’m excited to find ways that we can work together throughout the next couple of months.”

NDSU and UND held a joint legislative reception Jan. 10 to bring together higher education leaders, legislators and state officials to celebrate the state’s research universities. Walth and Wahl each provided brief remarks during the event.

The two student body presidents also gave separate testimony the following day during a session of the legislature. Their shared priorities are increasing funding for behavioral health services on campus, and funding for salary and benefits to help avert an increase in student tuition.

The friendship, collaboration and consistent priorities coming from the student leaders at NDSU and UND help to create a unified voice for the state’s research universities.

“When it comes to the legislative session, we’re in constant communication with each other. While we may not agree on which mascot is best … we are always willing to cheer each other on and support one another,” Wahl said.

Wahl is set to graduate from UND in the spring of 2023 with degrees in business management and interdisciplinary health studies. She plans to work in North Dakota before pursuing her master’s degree in public health and public administration.

Walth is scheduled to graduate this spring from NDSU with degrees in political science and strategic communication. He plans to seek career opportunities in either event coordination or politics. He also has plans to earn his master’s degree in the future.

The two are hopeful their professional paths will cross again after graduation, but until then they will remain friends and continue as natural leaders.