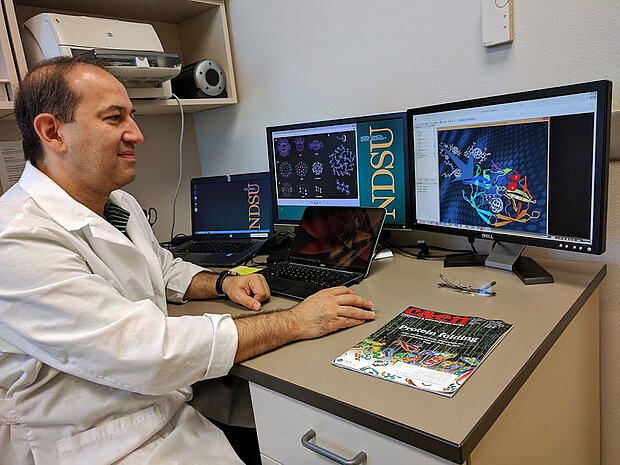 Bakhtiyor Rasulev, associate professor of coatings and polymeric materials, is working to create a new model to determine the toxicity of microplastics.

A new study by Bakhtiyor Rasulev, NDSU associate professor of coatings and polymeric materials, aims to create a new artificial intelligence model to determine the toxicity of various types of microplastics found in our environment. Rasulev’s research is supported by a National Science Foundation EPSCoR RII Track-4: EPSCoR Research Fellows award and is titled “Data-driven Computational and Machine Learning Assessment of Structure-Toxicity Relationship of Micro/NanoPlastics.”

Most microplastics aren’t engineered to be the size they are. But because plastics biodegrade only over the course of hundreds of years, they are the result of larger plastic items being broken down by environmental conditions such as UV light or temperature and by microorganisms in soil and water. According to the National Oceanic and Atmospheric Administration, microplastics include all plastic debris measuring less than five millimeters in length, or about the size of a sesame seed.

Microplastics come from a variety of sources such as tires, plastic bags and containers, and personal care products, but more than a third found in the environment are from synthetic textiles found in clothes.

Microplastics are found across the globe and eventually find their way into our bodies through the food we consume and water. While research on the long-term effects of microplastics on our health is only beginning, given that many chemicals found in plastics are endocrine disruptors that can cause damage to our livers and immune systems, the potential impact on humans is thought to be significant.

“The way that these chemicals interact with living organisms depends much on the structure and shape of the microplastics,” said Rasulev. “A key aspect of their toxicity is that their collective surface area increases as they become smaller. For instance, a one gram cube of material broken down to microparticles would still have the same mass of one gram, but its surface area could grow to as large as a football field.”

He said the shape of the microparticle determines how apt it is to be retained in a living body, in addition to the chemical structure. “Plastics break down into many shapes. Rounded particles tend to pass through the body easier than those with sharper edges or those with a spear-like shape are more apt to become lodged in tissue and remain in the body longer where they can cause additional damage,” Rasulev said.

A complicating factor in his work is the composition of some plastics is of multiple components.

Rasulev’s research project will determine the toxicity of the plastics that become microplastics and nanoplastics. His goal is to create an online tool that other researchers can use to predict toxicity levels of various plastic products when they become micro- and nano-plastic size.

A computational chemist, Rasulev will utilize the supercomputing power of NDSU’s Center for Computationally Assisted Science and Technology (CCAST) to create predictive models. By using a combination of actual tests and computational models, Rasulev can determine the accuracy of each computer model to the real world or predict experimental values.

“We’ll take a molecule, optimize it and generate the features of the specific chemicals that compose it and come up with its toxicity characteristics,” he said. “We’ll utilize AI and machine learning to do many of the steps required which will allow us to extrapolate our results to build models with limited human involvement.”

Rasulev’s research is in partnership with Rutgers University and their newly-established Center for Nanoscience and Advanced Materials, which focuses on interactions of emerging chemicals and advanced materials with biological and environmental systems. The partnership will provide Rasulev access to collaborators he has worked with previously along with access to additional laboratories functions.

“This is a good partnership given the expertise at Rutgers and the computational opportunities we have at CCAST,” he said. “In addition, the project will send one NDSU graduate student to work in their lab for a three month period each year to learn new experimental methods that complement our computational experiences.”

“Dr. Rasulev’s research is noteworthy as it leverages the value of collaborations with other R1 research universities like Rutgers,” said Colleen Fitzgerald, NDSU vice president of research and creative activity. “The project richly illustrates the value proposition, where a better grasp on the factors and mechanisms underlying the biodegradation and toxicity of microplastics, may in turn develop more cost-effective ways to assess their toxicity, potentially mitigating their environmental and health impact.”