Advancing understanding in the areas of innovation, trade, and institutions to identify policies and solutions that enhance economic growth and opportunity

On September 19th, John Allison, Former CEO of BB&T Corporation Spoke in the Barry Hall Auditorium, filled with students, faculty, and community leaders.  Allison, who led the financial services company through the 2008 recession and grew the company's assets from $4.5 Billion at the beginning of his tenure to $152 Billion at the end, captivated the audience with his presentation on "The Philosophical Fight for the Future of America."  Mr. Alison, who currently is Executive in Residence at the Wake Forest School of Business, was named one of the top 100 CEOs over the last decade by The Harvard Business Review.

John Allison is the first in the Challey Institute's Distinguished Speakers Series.  The series brings thought leaders from around the world to discuss issues related to innovation, trade, and institutions, and the roles they play in enhancing economic opportunity and growth. 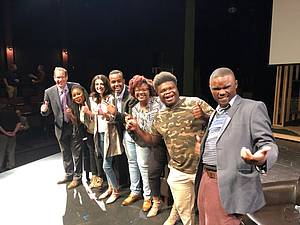