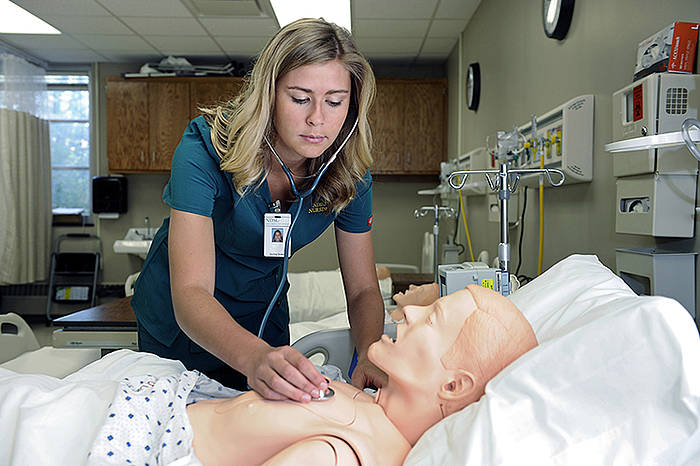 June 21, 2016 – Fargo and Bismarck, North Dakota – North Dakota State University’s School of Nursing has been named one of the nation’s top nursing schools by NursingSchoolsAlmanac.com.

In the comparison of programs across the U.S., NDSU’s School of Nursing in Fargo, together with NDSU Nursing at Sanford Health in Bismarck, are listed as:

In its inaugural ranking of U.S. nursing schools, editor-in-chief Christopher McMillen said NursingSchoolsAlmanac.com collected data on more than 3,200 institutions nationwide. From that data pool, just 10 percent of schools considered made the group’s final list. Methodology used for the ranking offers a comprehensive view.

Criteria for the NursingSchoolsAlmanac.com listing included:

“One aspect of NDSU that impressed us greatly is its history of strong student performance on licensure and certification exams,” said McMillen. “For example, BSN students have passed the NCLEX exam at a 90%+ rate for at least eight consecutive years, well exceeding state and national averages.”

“The commitment of our nursing faculty, clinical instructors, outstanding students, and the clinical sites and preceptors who help educate students all play significant roles in developing an exceptional nursing program,” said Dr. Carla Gross, associate dean of NDSU’s School of Nursing and Fargo site chair. “As a School of Nursing at a land grant institution, we are committed to responding to meet the state’s crucial need for health care professionals.”

"This recognition of NDSU's nursing program—which also serves residents in central and western North Dakota through the NDSU School of Nursing at Sanford Health—highlights the work of faculty, staff, students and the health institutions we work with to educate highly-qualified nurses to meet the state's needs," said Karen Latham, chair of NDSU Nursing at Sanford Health in Bismarck.

Programs in NDSU’s School of Nursing in the College of Health Professions include:

“NDSU’s nursing faculty and staff are dedicated to providing an exceptional education for our students,” said Charles D. Peterson, dean of the College of Health Professions. “North Dakota will have 4,430 registered nurse openings through 2020, according to a national report from the Georgetown University Center on Education and the Workforce. Many groups—including NDSU’s School of Nursing—are working to develop ways to help meet the state’s health care workforce needs, which are especially acute in the area of nursing,” said Peterson.

An earlier report from the North Dakota Center for Nursing showed vacancy rates for RNs at 7.3% for rural hospitals and 8.10% for urban hospitals in 2014.