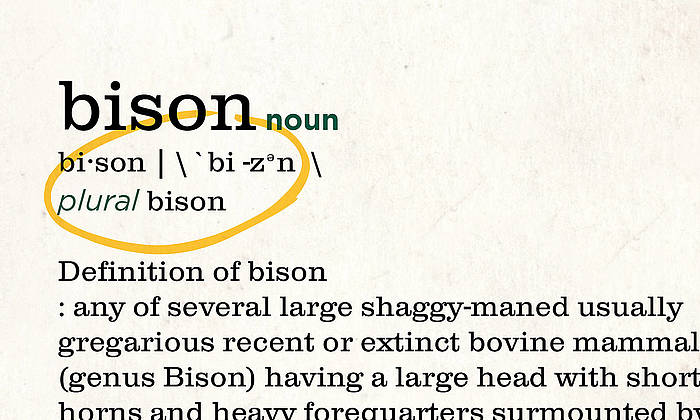 What a difference one little sound can make. For example, take the word “bison.”

NDSU’s sports teams have been known as the Bison since 1922, and the beloved mascot fittingly honors the massive, powerful animal that once dominated the Northern Plains. We proudly pronounce the word with a “Z.” However, nearly everyone else says it with an “S” sound.

And, therein, lies the rub.

In 2013, a team of NDSU students conducted an investigative study under the direction of English professor Bruce Maylath to find out more about the different pronunciations.

One of the student researchers was Kellam Barta, a then-senior who double-majored in English and psychology from Fargo.

“Sportscasters from across the country use ‘S,’ and people around here get upset,” Barta said then. “We have a strong allegiance and a sense of local pride in our mascot, and the pronunciation also identifies who we are as people. When you hear someone say bison with an ‘S,’ you know they are someone other than us.”

The study team found the American footprint of “bison with a Z” is fairly localized, with Fargo-Moorhead at the center. The region is primarily eastern North Dakota, generally ending near the Missouri River. To the south, the pronunciation is found to the Sisseton, South Dakota, area and it extends to about Alexandria, Minnesota, to the east.

“There really is no correct way to say the word. But, this phenomenon is part of encoding the identity of ‘us’ or ‘them,’ ” Barta said. “Our pronunciation here is quite exceptional. Most of the rest of the country would consider it strange to hear the word ‘bison’ with a ‘Z’ in it.”

According research team, there may be a historical factor in all this. Bison is a French word pronounced “Bee-zohn,” and our pronunciation may have its roots there, going back generations to the area’s early fur traders and explorers. “Winnipeg has a significant French influence, so it’s very possible we borrowed from them. That would also explain why hardly anyone else in the U.S. says it that way,” Barta said.

Bison fans usually aren’t shy about letting others know which way is truly accurate, at least from our perspective. “Local folks feel strongly about what they perceive is the ‘correct’ pronunciation,” Barta said. “We often tell people from other parts of the country to ‘Say it right.’ ”