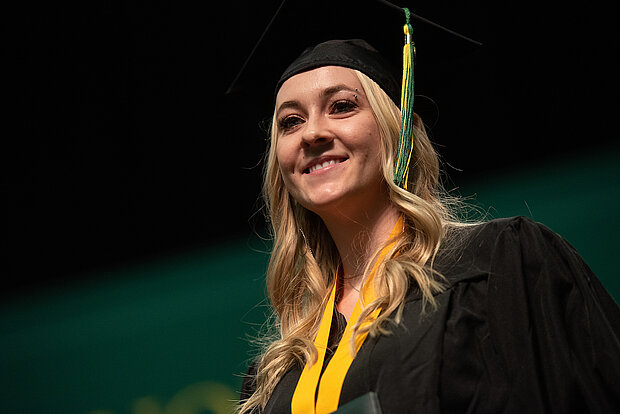 NDSU's spring commencement is scheduled for Saturday, May 15, in the Fargodome. As of April 26, a total of 1,245 graduate, professional and undergraduate students have indicated they will participate in the modified in-person celebration.

NDSU’s spring commencement ceremoniesare scheduled for Saturday, May 15, in the Fargodome. There will be two ceremonies – 10 a.m. and 2 p.m.

As of April 26, a total of 1,245 graduate, professional and undergraduate students have indicated they will participate. There are 2,166 eligible students.

Colleges participating in the 10 a.m. ceremony include:

• College of Human Sciences and Education

Colleges participating in the 2 p.m. ceremony include:

• College of Science and Mathematics

“Strong attendance numbers indicate that students are excited about the opportunity to participate in a modified in-person commencement ceremony,” said Jackie Schluchter, associate registrar. “We are excited as well to congratulate these students on their academic accomplishments.”

According to Schluchter, Face coverings over the mouth and nose are mandatory for all participants and guests. Venue social distancing guidelines also will be followed.

Students are limited to four guests; each guest will be required to present a ticket upon entry.

The ceremonies will be streamed for individuals who are unable to attend but wish to celebrate the accomplishments of the graduates.

Longtime NDSU administrator Prakash Mathew has been selected to receive an honorary Doctorate of Humane Letters. He will be recognized during the 10 a.m. ceremony. He had an exceptional 34-year career at NDSU, serving as vice president for student affairs from 2006 until his retirement in 2014. He has been associated with the university since 1976, except for a four-year absence when he was director of Residence Life at Mankato State University.

Among his many honors, Mathew received the NDSU Blue Key Doctor of Service Award in 1996 and the NDSU Athletics Bison Impact Award in 2015. In his profession, he was recognized with several honors from the National Association of Student Personnel Administrator, including the Region IV West Distinguished Service Award, Pillar of the Profession award, James J. Rhatigan Outstanding Dean Award and the Scott Goodnight Award for Outstanding Performance as a Dean. An NDSU residence hall is named in his honor – the Mathew Living Learning Center.

Class representatives have been selected to give addresses during the ceremonies.

Zeina Abouelazm, who grew up in Cairo, Egypt, is set to speak at the 10 a.m. ceremony. She is receiving a Bachelor of Science degree with dual majors in emergency management and management communication. She was a highly active student, serving as a resident assistant, campus service representative for the Emergency Management Student Association, president of the American Red Cross Club, philanthropy chair for the National Blue Key Honor Society, president of the Arab Student Association and event planner for the International Student Association. She earned several academic honors, including the IAEM Robert Bohlmann Scholarship for Service in Emergency Management, Communication Department Scholarship, George A. Youngs Jr. Emergency Management Scholarship, DEMNDSU Community Service Award, Lorraine Murphy Global Diversity Scholarship and Academic and Cultural Sharing Scholarship. She had four internship experiences including one at the North Dakota Department of Emergency Services, and was a career mentor at the NDSU Career and Advising Center. In August, Abouelazm will continue her education at American University, Washington, D.C., where she will pursue her master’s degree in international development and work as a graduate assistant in the School of International Services. She is the daughter of Mostafa Abouelazm and Mona Sherif.

Marian Taiwo is scheduled to give an address during the 2 p.m. ceremony. She is an outstanding student-athlete who is earning her Bachelor of Science degree in biological sciences with a minor in chemistry. A native of Ottawa, Ontario, Canada, she earned a full-ride athletic scholarship to play women’s soccer at NDSU. Taiwo was a research assistant in the NDSU Department of Biological Sciences and was the recipient of the Academic and Cultural Sharing Scholarship. She was named three times to the Summit League Academic Honor Roll and twice was selected for the Summit League Commissioner’s List of Academic Excellence. She also was named a Border States Electric Student-Athlete of the Week on March 2, 2021, after she scored three goals against the University of Nebraska-Omaha. Following graduation, she plans to attend medical school, earn a Doctor of Medicine degree and practice as a family physician. She is the daughter of Emmanuel and Alice Taiwo.

The soloist for both ceremonies is Elijah O’Sullivan, who will pre-record his pieces.

O'Sullivan, who is graduating with a Bachelor of Music in vocal music education and a minor in instrumental music education, is from Albertville, Minnesota. He discovered his love of choral singing in high school, which prompted him to continue his musical experience at NDSU. Since then, he has performed in several ensembles. He was a part of the NDSU Concert Choir throughout his collegiate experience, of which he was vice president for two years. He also was a member of the Madrigal Singers and the Bison Arts Singers. O'Sullivan was a member of several operatic productions, including Mozart’s “Le Nozze di Figaro,” Ravel’s “L’enfant et les sortilèges” and Mozart's "The Impresario." He was involved in several musicals during his time at NDSU, including Stephen Schwartz's "Children of Eden" and Stephen Sondheim's "Into the Woods." While at NDSU, O'Sullivan studied under faculty members Mariane Lemieux-Wottrich and Kelly Burns. Most Recently, O'Sullivan qualified for National National Association of Teachers of Singing. He plans to find a teaching position in Fargo and hopes to return to college in the future to obtain a master's degree in vocal performance.