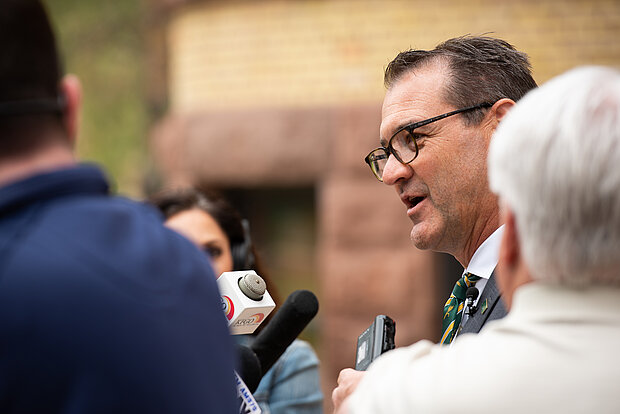 NDSU President David Cook talks with reporters on May 17, his first day in the position.

NDSU President David Cook is all set to go. On May 17, the university's 15th president spent his first day in his new job.

“It’s day one, and I’m super excited to be here,” said Cook, who was named to the post by the State Board of Higher Education on Feb. 23. “I feel very welcomed. There’s a lot of hard work to do but, fortunately for me, I had many people do great work to tee me up to have some success.”

Cook had a busy day, participating in meetings with his cabinet, system office personnel, board committees and NDSU Faculty Senate leadership. He also enjoyed his first Scandinavian Buffet, an annual event on campus.

“Listening and learning will be a big part of the agenda coming out of the chute,” said Cook, who did plenty of work preparing for his initial day as president. He estimates he’s spent about 200 hours on Zoom meetings with university administrators, alumni and community leaders since he was selected for the post.

“I’ve been trying hard to do my homework,” he said. “I’m figuring things out, but I’ve still got a lot to learn. Throughout the summer, there will be a lot of listening. I’m going to crisscross the state for two straight weeks attending NDSU Field Days, seeing what everybody wants in the new president. Internally, I will try to visit every single unit on campus as quickly as possible to get a sense from them what they need and what they are looking for.”

Before joining NDSU, Cook was the vice chancellor for the Office of Public Affairs and Economic Development at the University of Kansas. He previously was vice chancellor of the KU Edwards Campus in Overland Park, Kansas. Cook also spent 14 years at the University of Kansas Medical Center, with the final seven years as a member of the leadership cabinet.

Cook said a land-grant, student-centered university like NDSU serves the entire state – its work is important.

“I’m a first-generation college student. Higher education has opened a lot of doors for me,” Cook said. “I believe deeply that it changes lives. For my journey, higher ed has been everything. That’s why I aspired to be a president.”

Cook earned his bachelor’s degree from Iowa State University, and his master’s degree and doctorate at the University of Kansas.