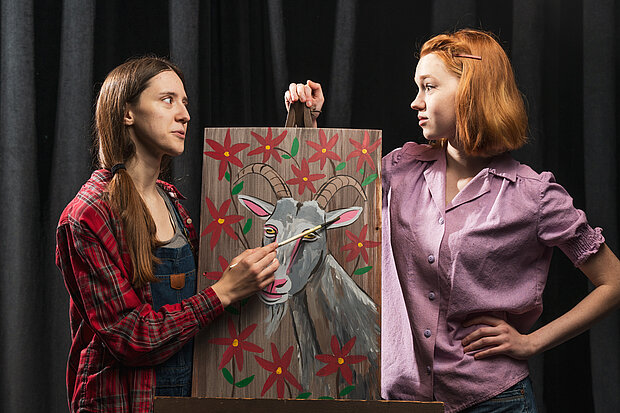 Theatre NDSU’s production of “Alabaster” has been selected for the regional Kennedy Center American College Festival.

Theatre NDSU’s recent production of “Alabaster” has been selected to perform at the regional Kennedy Center American College Festival in January. The production will be featured at the Region 5 festival scheduled for Jan. 22-28 in Des Moines, Iowa.

The national program is sponsored by the Kennedy Center to recognize and support excellence in college theatre.

Theatre NDSU is scheduled to remount the production on Jan. 20 at 7:30 p.m. in the Walsh Studio Theatre. “This will be an opportunity for people to see it again, or for the first time, before we leave for the festival,” Engler said.

The regional festivals include workshops and competitions for the students and professional development opportunities for students and faculty. The event also has a college fair for students who are currently in two-year degree programs.

The Kennedy Center festival is a national theater program involving about 18,000 students annually from colleges and universities across the country. The festival aims to recognize and celebrate the finest and most diverse work produced in theater programs and encourage productions of new plays, especially those written by students, the classics and experimental works.

Since its inception, the festival has given more than 400,000 college theater students the opportunity to have their work critiqued, improve their dramatic skills and receive national recognition. More than 16 million theatergoers have attended approximately 10,000 festival productions nationwide.