The NDSU soybean breeding program strives to provide superior soybean varieties to the farmers of North Dakota.  This is achieved in multiple ways: 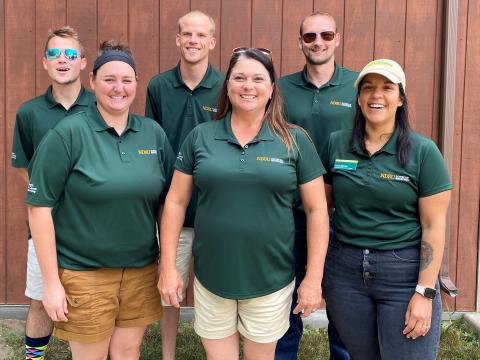 This project would provide soybean farmers with improved non-GMO cultivars that have been developed by NDSU. Also, growers need information that enables them to select the best private company variety for their farm and to identify which varieties are best on Soybean Cyst Nematode (SCN) infested soil and iron-deficiency chlorosis (IDC) prone soils. This project would provide yield results of variety testing on SCN-infested soils and soils that exhibit IDC symptoms. Protein and oil content of company varieties will also be provided. The NDSU soybean breeding program has a long history of providing very competitive varieties. There are many improved non-GMO experimental lines that are close to being released as named cultivars or as specialty release food grade varieties. The non-GMO breeding effort is very important as a source of high-yielding parents for use in the development of glyphosate-resistant cultivars and for specialty release to soy food companies.

Iron-deficiency chlorosis (IDC) is common in North Dakota and reduces yield. The best way to reduce the yield losses associated with IDC is to select a tolerant cultivar. Growers need data that compares varieties from different private companies in the same environments using the same experimental method. This proposal would permit approximately 350 different GMO company varieties and non-GMO varieties to be evaluated for IDC tolerance. An additional 100 NDSU breeding lines would be evaluated. All private company varieties that have been entered into the Langdon Research and Extension Center (REC), Carrington REC, Minot REC, and Fargo Main Station yield trials will be evaluated for visual ratings of IDC at multiple field locations. In addition, the 100 NDSU lines will be tested genetically for known IDC molecular markers. These data will be contrasted against the field scores to determine accuracy of IDC prediction. The validation of these markers will allow for selection of IDC tolerant varieties in the NDSU program. Visual yellowing that is caused by IDC has been shown to be closely correlated to yield for fields that have IDC. This data will provide an independent confirmation of the IDC tolerance of company products and enable growers to compare varieties from different companies. This proposal will aid growers in selection of tolerant cultivars to increase yield on fields that have a past history of IDC.

The grant would enable NDSU to continue the process of developing glyphosate-resistant soybean cultivars. There are glyphosate-resistant experimental lines in the NDSU breeding program that are being tested in a range of maturity that varies from a 1.0 to a 00.4 maturity, and properly adapted throughout the entirety of North Dakota. New experimental lines are developed each year. This project will significantly reduce seed costs to soybean growers. NDSU has a very large breeding program devoted to development of glyphosate-resistant cultivars and will continue to expand this year. Monsanto has stated that starting in 2015 growers will be able to save their own seed for planting the following year. However, the private company cultivars are also protected under a Variety Patent. Cultivars developed at NDSU are not patented. The cost savings for growers that purchase glyphosate-resistant cultivars developed by NDSU will occur the second and subsequent years after the initial purchase of the seed. The seed of new experimental lines will be increased in Chile, S.A. each winter to speed the development and release.

SOYGEN2: Increasing soybean genetic gain for yield and seed composition by developing tools, know-how and community among public breeders in the north central US

The soybean research community has generated incredible public resources for soybean breeding, including collaborative yield trials such as the Northern Uniform Soybean Trials (NUST), which date back to 1941, and commodity board funded genotypic data and genotyping platforms. However, these tools can be better leveraged to enhance genetic gains for yield and improvement for seed composition in soybean. As part of our first objective, we are adding value and utility to these resources through a breeding database housed within SoyBase, the current community-supported USDA-ARS repository for soybean genetics and genomic data. In addition to the agronomic, resistance, and composition data normally collected in the NUST, we have added GPS coordinates in order to access environmental data for the NUST and have added genotypic data to both the NUST and the SCN Regional Trials, this information will facilitate breeding for stability of both yield and seed composition.

Genomics-assisted breeding entails the use of genome-wide molecular marker data to aid in breeding decisions that make breeding programs more efficient and effective. Applications range from the use of genomic selection, which can increase selection intensity and allow selection of parents earlier in a program, to the use of genomic data to optimally pair parents for creation of breeding populations containing more superior breeding lines and even possibly more favorable correlations between traits such as seed yield and protein. This latter application has been called “genomic mating”.

Numerous scientific articles have been published on the development and optimization of genomics-assisted plant breeding and, in part, through our prior NCSRP project, we have learned about the optimal application of genomics-assisted breeding methods applied to soybean. The actual implementation of genomics-assisted breeding in the public plant breeding communities, however, has been minimal. Thus, Objective 2 is focused on the development and use of high-throughput genome-wide genotyping technologies that are of low cost with high-quality repeatable marker data, and making available tools for genomic data management and decisions that integrate genomic data and phenotypic data along with various analysis pipelines in a user-friendly form. While we are making these tools and technologies widely available, the transfer and availability to the public sector is critical to our ability to effectively train future soybean breeders, many of whom will be employed by private sector companies using these techniques.

Increases in soybean yield through breeding have been slower than growers expect. A collaborative study led by Diers of a historic set of MG II-IV varieties released from 1923 to 2008 revealed a recent rate of genetic gain of 0.43 bu/ac/yr, whereas reports of genetic gain in corn generally range from 1.0 to 1.2 bu/ac/yr. Moreover, this same study found that protein has decreased between these time periods by 1.7 percentage points, an undesirable outcome. Objective 3 of this work focuses on the evaluation of different breeding methods, each of which target one or more areas for improvement, such as selection intensity, accuracy, diversity, and the time required for each breeding cycle, and simultaneous improvement of traits that typically show negative correlations, such as yield and seed protein content. Breeders will implement and test the methods in their own breeding programs to determine which methods are most viable to improve genetic gains. Compiling data across breeding programs will provide power and confidence in our findings.

The proposed activities build on the previous project funded to this group by NCSRP. One main objective in that project dealt with extensive evaluation of diverse soybean genotypes from the USDA Soybean Germplasm Collection over four years and 30 environments to obtain high-quality phenotype and environment data. Completion and follow-up on that is detailed under Objective 4 in this project, and it provides foundational information for tool development and implementation. Information from that study will be leveraged in this project for Objectives 1, 2, and 3. The entire set of 750 accessions evaluated in the project, or various subsets of those (i.e. exotic land races only, elite germplasm only, certain geographical regions only, etc.) can be used as training sets for prediction of yield, seed composition, maturity, and other traits for various objectives and for other programs.