NASA internship ‘inspired me even more to pursue difficult tasks’ 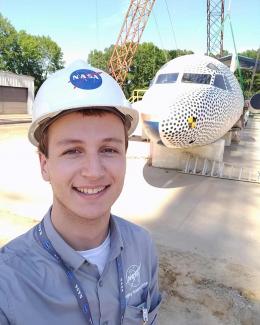 At NDSU, you’ll have internship opportunities that are out of this world.

“NASA is an amazing place to work because your co-workers and fellow interns are from all over the U.S. and around the world,” said Fristed, who is from Prior Lake, Minnesota. “During my time at Langley, I could be working with people from Chicago, Salt Lake City, Houston, Nebraska and Iran in just one meeting. NASA centers are melting pots of ideas and people.”

His specific job was to develop a sorting program that automatically links aircraft fastener part numbers with parameters specified by the user. The program was needed to verify fastener Computer Aided Design files used at the center.

Fristed also toured the facilities, and learned about complicated subjects from the many experts at the center.

“This internship showed me what it's like to be a part of a real engineering organization, and not just any organization – NASA tackles the hardest problems we know,” said Fristed, who may go on to graduate school and plans a career in aeronautics or astronautics. “Seeing what it takes to succeed and thinking that it's in the realm of possibility for me to achieve inspired me even more to pursue difficult tasks.”

“Andrew was highly motivated to pursue the NASA internship and his drive paid off,” Estevadeordal said. “As an excellent and inspired student, he has been very curious and alert about the subjects taught in lectures. For instance, during our thermodynamics classes, he readily followed and related energy and supersonic events to space exploration. He used much of the learnings from school, put them to practice and gained further experience in the real world.”