‘My experience here showed me how to better solve problems’ 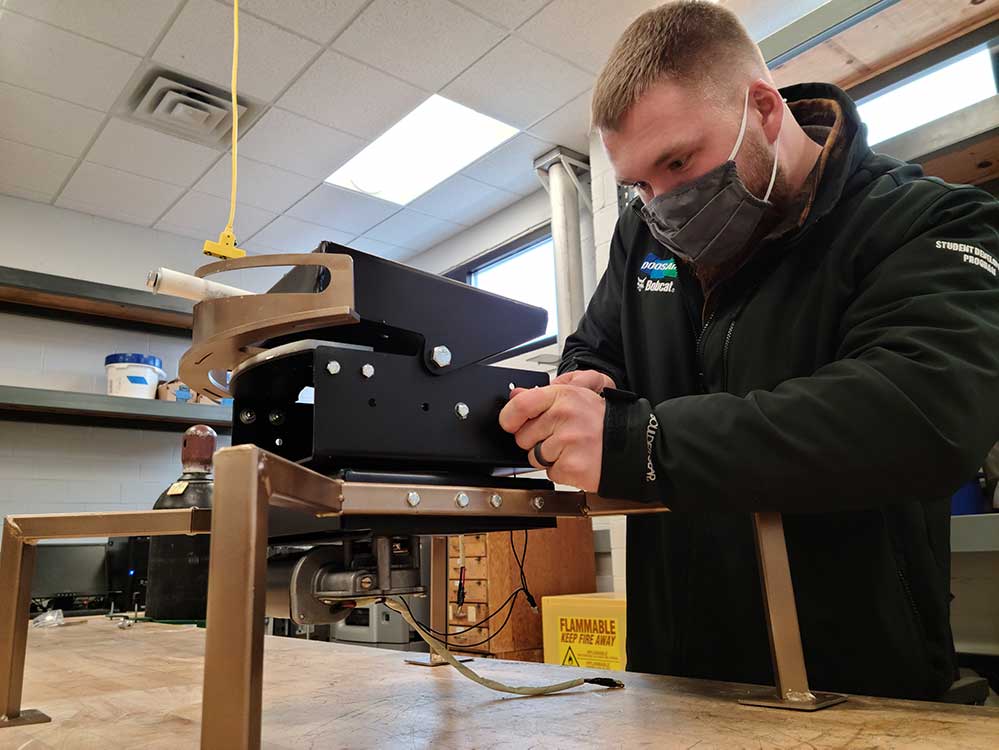 Four NDSU mechanical engineering seniors have developed a project that lets them take careful aim at the skills they need for successful careers.

The students – Corban Herman, Paul Sayler, Lane Ulmer and Jonah Zimmerman – have developed the Smart Wobbler Kit, an innovative tool for people who love hunting or trap shooting. The project was completed under the supervision of Alan Kallmeyer, professor and chair of mechanical engineering.

The Smart Wobbler Kit is believed to be the first of its kind.

“Our goal was to create a totally new experience for the tech-savvy, back-40 trap shooter who wants to take their game to the next level,” said Zimmerman, who is from Hazen, North Dakota.

The kit enables the auto trap to throw targets at random trajectories, giving shooters more challenging and realistic scenarios. Fabricated from sheet metal, the device has two motors used for both horizontal and vertical motion.

Teamwork was a key ingredient in the project’s planning and development. “I designed the sheet metal parts, Paul did gears and machined components, Lane sourced stock parts, welded, and did all the videography. Corban was our electronics and programming guy,” Zimmerman said. “But none of this happened in a vacuum. Each decision from the design to the final build was vetted by all team members. Our roles were fluid throughout the entire process. If there was a need, someone stepped in.”

The students experienced the entire engineering design process, from the first glimmer of an idea to the final product. As they worked, they got a taste of nearly everything they can expect in the professional world.

“I learned how to work as a team with guys who all have different strengths. I was also challenged to grow in project management skills, especially as deadlines for important milestones tended to coincide,” said Herman, who is from Champlin, Minnesota, and plans a U.S. Navy career after he graduates in the spring. “With me taking the lead on the electronics, I was definitely challenged to grow in an area outside of my immediate major. These kinds of cross-competency challenges provided quite a bit of value to me.”

Meanwhile, Sayler describes the potential of the Smart Wobbler as limitless. “It’s something new in an industry that doesn’t see many fresh ideas – the random motion keeps the sportsman on his or her toes,” said Sayler, who is from Fargo. “And the project also really helped give us a well-rounded perspective of what mechanical design requires.”

“I will take everything I learned during this project and my college career and be able to use it every day at work,” said Ulmer, who has accepted a position with Applied Engineering, Bismarck, North Dakota.

“I would definitely suggest NDSU to a person who is looking for a very affordable and highly successful mechanical engineering program. I transferred in after receiving my associate’s degree from Itasca Community College,” said Ulmer, who grew up I Lake Park, Minnesota. “I was able to make a seamless transition. When I got here I had no problem finding friends to hang out or study with, and the faculty was very willing to help.”

Their advice? NDSU may be the right choice for you.

“NDSU has given me a start on my professional skills toolbox. Through NDSU, I have learned how to systematically solve problems,” said Zimmerman, who will work at Doosan Bobcat, Bismarck, North Dakota, following graduation. “I have a good foundation to build off of as I enter the real world.”

Herman agrees, noting his professors have challenged him to be a better student. “I would recommend NDSU, especially for engineering, as there are solid professors, great connections to local companies and excellent student clubs and organizations to drive your personal and career development.”

And Sayler said NDSU helped him develop a better mindset on how to approach life, as he prepares to begin his career at Red E, Fargo. “My experience here showed me how to learn, how to better solve problems I encounter and how to engage with others in a meaningful way,” he said. “I would recommend NDSU in a heartbeat.”

Take aim at your career. Apply to NDSU today.