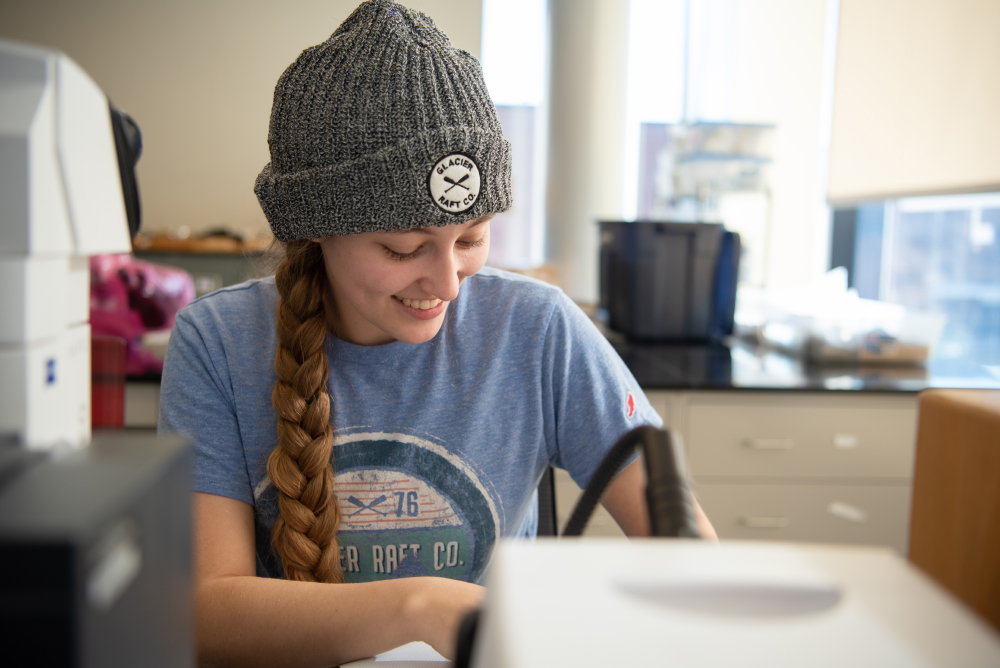 NDSU researchers and students are making groundbreaking discoveries and changing what we understand about the world and its formation.

Lydia Tackett, associate professor of geology, is finding never-before discovered evidence of vertebrates in New Zealand that coincides with her research on predator-prey relationships in the late Triassic period.

“Most of the time when you find something, you’re probably finding stuff that someone else has discovered before,” said Tackett. “In New Zealand, there is only one single report of a marine vertebrate for the entire Triassic period, which was a 50-million-year period, for the entire country. Every single type of tooth that we have found from New Zealand has never been reported there before.”

Students are working alongside Tackett in her lab to pick through microfossils trying to prove a theory called evolutionary escalation – that predator-prey relationships affect evolution.

“The classic example is the cheetah and the gazelle,” said Tackett. “These are two of the fastest mammals on the planet. They’re the fastest things on land in the world. And one is the predator of the other. So, the theory is the cheetah was fast, so the prey had to get faster. They get locked into an evolutionary arms race.”

The fossils Tackett’s lab is analyzing are smaller than a millimeter. They’re also hard to preserve in full form, so Tackett’s lab is looking at the teeth of these predators and the shells from their prey.

“The way that we’re approaching this idea, which has never been able to be directly tested before, is by looking at the teeth of the fish that are tiny and are sediment-sized,” said Tackett. “The teeth, when the organisms die, they fall out. So even though the organisms are completely broken up into millions of tiny pieces, some of their teeth land on the sediment and get incorporated into it.”

These samples don’t come from anywhere near North Dakota. The fossils are from areas that used to be shallow, marine environments when the world was one supercontinent. Today, those locations are in Nevada, Italy and New Zealand.

Tackett, with a group of undergraduate and graduate students, goes to these locations, collects the rocks with fossils and returns them to the lab to separate the samples from the rocks.

“In the lab, we have microscope set ups,” said Tackett. “We have students who are doing the picking. Looking through the residues that are left behind by the rocks.”

Emily Jackson, a junior geology student from Fargo, North Dakota, is one of the students working in Tackett’s lab.

“What’s most exciting is getting on the microscope and actually looking for the microfossils,” said Jackson. “It’s really fun when you actually find something.”

“It’s great to see undergraduates blossom into more confident researchers,” said Annaka Clement, a fifth-year doctorate candidate working in Tackett’s lab. “I think it’s excellent that NDSU has so many opportunities like that in geoscience.”

Clement trains the undergraduates on lab processes and analyzing the data. In addition to finding and excavating the fossils, students in the lab are doing morphometric analysis to understand changes in the shells of prey over time. They’re also trying a new technique to differentiate the teeth from the sediments. This involves sifting the sediments in a dense liquid that allows the teeth to stay at the surface while the heavier materials sink to the bottom. It’s more efficient than hand-picking the fossils from the sediment, said Tackett.

Tackett’s research is being funded by the Faculty Early Career Development Program through the National Science Foundation. This program funds early-career faculty who have the potential to be leading researchers and teachers in their field. She is on year four of her grant.

The preliminary data seems to support the original thesis, that predators drive large-scale evolutionary change. These results are promising, but the research is far from over. Tackett hopes to return to New Zealand with another group of students in the winter to collect more samples for analysis in her lab.

“You don’t usually get such an opportunity to add to the existing knowledge for such a long geologic time period and for an entire country,” said Tackett. “That part is really fun for me, to find stuff that no one has ever seen there before.”