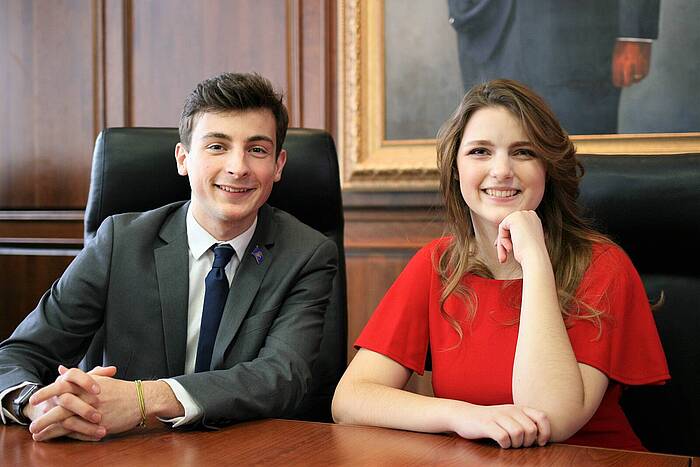 NDSU’s new student body leadership is excited to get started on its priorities. Student body president Matthew Friedmann and vice president Kylee Arndt were elected during an online election April 7-8.

Friedmann is a senior majoring in management from Mendota Heights, Minnesota. During the coming academic year, he will be a graduate student studying educational leadership.

“Having the opportunity to serve students in this role means so much to me. I care so much about our students and I want them to know that I will represent their voice to the best of my ability,” said Friedmann, who is a third-generation Bison. “This isn’t an opportunity I will take for granted and I’ll work tirelessly so that every student knows I have their back.”

Friedmann was Student Government’s executive administrator this academic year, and in 2018-2019, he was a senator from the College of Business

He received the Dean’s Excellence Award and is a Mancur Olson Scholar. His student activities include the Pride Alliance and Sevrinson Hall Government. He also was Homecoming king and the NDSU women’s club hockey manager.

Arndt is a junior majoring in electrical engineering from West Fargo, with minors in entrepreneurship and honors.

“On my first real day of being a college student, first-year orientation, I saw the Student Body president and vice president on the Festival Concert Hall stage, and it was then, that I was determined to be up there on that stage – I wanted so badly to have the chance to be a leader for my university,” Arndt said. “Now that I am in this role, I am excited for the opportunity to drive initiatives, engage with students and serve as an advocate for them amongst all of our administrators and student leaders.”

Arndt was assistant executive commissioner of finance this year and in 2018-2019, she served as a senator for the College of Engineering. She is an Engineering Ambassador and active in Kappa Alpha Theta, Society of Women Engineers and Circle K International.

Arndt is a Harry D. McGovern Scholar and has been awarded the Kenneth Hoefs Engineering Scholarship, Ed and Kay Anderson Scholarship and Amy and William Layne Scholarship.

The student leaders say they will focus on three main areas:

The goal is to expand mental health services for students by partnering with the counseling center to offer more programing options. In addition, they will work with Student Health to provide free sexually transmitted infection testing for all students.

The leadership will send a student to the state legislature to represent students’ needs.

The leaders will work to revitalize a sense of pride when students are welcomed back to campus this fall.

As a student focused, land-grant, research university, we serve our citizens.