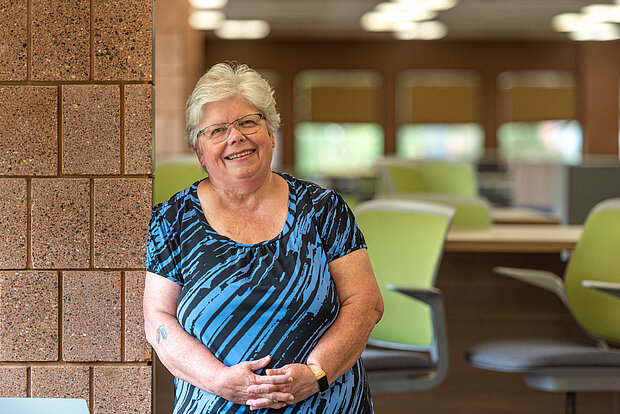 Candy Skauge, a longtime employee at NDSU Libraries and Archives, took classes for 16 years to earn a bachelor's degree in art.

Opportunity, persistence and the desire to continually learn drove Candy Skauge to a 16-year pursuit of an art degree at NDSU. The tuition waiver offered to NDSU benefited employees made the decision easier. She was able to receive a break in tuition and NDSU, as her employer, encouraged her goal of earning a degree.

For Skauge, it was about setting a goal and achieving it, no matter how long it took. That anything is possible if you work hard and set your mind to it.

For the past two decades she has taken a class each semester in art or sociology on campus, while working full-time at NDSU Libraries and Archives.

“I took one class at a time, sometimes two, one on campus and one online,” said Skauge. “I am very proud of the fact that it took 16 years, it shows I have persistence.”

She started out taking larger general education courses. She always arrived early and sat at the front of the classroom. Skauge explained that she was often asked if she was the instructor because of her age.

It was during a geology lab class assignment that she discovered her interest in drawing. At that point she began taking drawing and painting classes, which were smaller and more specialized.

“Those students over the years just seemed to accept me,” said Skauge, who also earned a minor in sociology. “They don’t see me as an old person, but as another artist like themselves. My age is 68, but in my mind I’m still young, willing to try new things, explore new ideas, and be outspoken. But I’m also able to relate and comprehend what the younger students are going through.”

Skauge has learned a great deal from the classes she’s taken. She’s learned to collaborate and think creatively, push herself to try new things and appreciate the calmness and focus needed to produce art that evokes emotion.

She appreciates the expertise of her professors guiding her in this journey.

“The art instructors are very knowledgeable and are more than willing to help students advance their new ideas,” said Skauge. “I feel connected to the Renaissance community, and follow several students and faculty on social media. I attend their gallery openings and have entered pieces of my own as well, not always successfully, but that’s okay. It’s the trying and hopefully succeeding that’s important.”

Although it takes persistence, Skauge reminds others that the opportunity is there. She encourages them to set goals and achieve them, no matter how long it may take.

“Being able to take classes tuition free except for fees is an amazing opportunity,” she said. “Expand your knowledge and get to know the students. I’ve become friends with many over the years.”