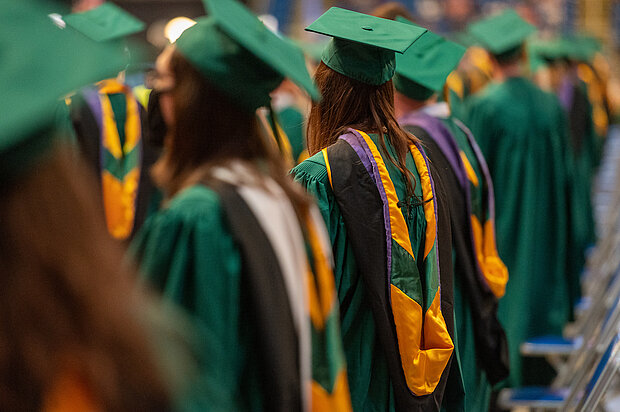 2 p.m. - College of Arts, Humanities and Social Sciences; College of Engineering; College of Human Sciences and Education; and interdisciplinary studies.

Graduate students receive hoods during a hooding ceremony at the time their degrees are conferred. The hood is a triangular fold of cloth worn over the back of the gown. The hood is faced with colored fabrics that denote the graduate’s field of study as well as the university

Students who earn academic honors wear adornments, such as cords, ribbons and medallions, as part of their academic regalia.

White stole with gold embroidery: Member of Tau Sigma Delta national architecture honor society who has a 3.0 grade point average and is in the upper 20 percent of the class.

Yellow stole with letters “NDSU” and university seal (Stole of Gratitude): Worn by any NDSU student during the ceremony, then presented to a person chosen by the student who provided extraordinary support and turned a dream into a reality.