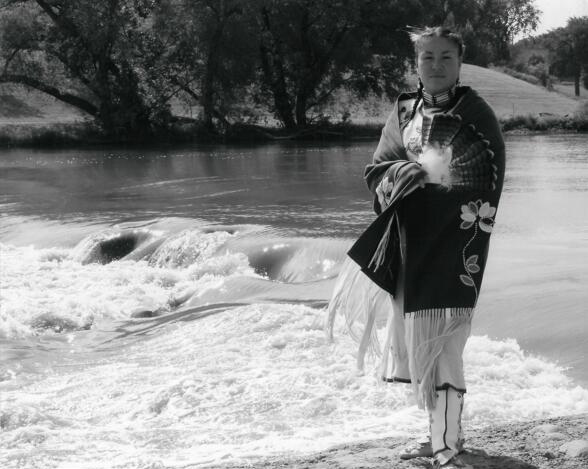 Historian and storyteller Christy Goulet is scheduled to give a presentation at NDSU on Indigenous People's Day.

The NDSU Office of Multicultural Programs is scheduled to host a local historian and storyteller to help celebrate Indigenous People’s Day.

Christy Goulet, an enrolled tribal member of the Turtle Mountain Band of Chippewa, is slated to share her personal experience of embracing her identity as an Indigenous woman living in the contemporary world on Monday, Oct. 10, from 10 a.m. to noon near the Babbling Brook on the NDSU campus. Spectators may come and go throughout the presentation.

“The importance of having the event on campus is to bring awareness about the American Indian Religious Freedom Act of 1978, and how far Indigenous peoples have come in the healing from genocide and ethnic cleansing,” said Goulet, whose Indigenous name is Wishkobzi Nibi Ikwe (To be sweet like the water women).

Goulet said she strives for cultural preservation and lives a traditional Indigenous lifestyle. She was adopted by Anna LittleGhost and participated in a ceremonial rite of passage, which includes Sundance (17 years), Vision Quest (seven times), naming ceremony and completion of all Lakota/Dakota/Nakota ceremonies.

A tipi also will be erected near the Babbling Brook during the morning of Oct. 10. It will be available to visit and for photos from about 8:30 a.m. to 5 p.m.

Jaclynn Davis Wallette, director of the NDSU Office of Multicultural Programs, said Indigenous People’s Day is an opportunity to celebrate communities coming together to learn about each other.

Other local Indigenous People’s Day events include mini powwows at the Fargo Public Schools Agassiz building from 6 p.m. to 8:30 p.m. and Moorhead High School from 6 p.m. to 10 p.m. The events are free and open to the public.

Indigenous People’s Day honors Native Americans, their resilience and their contributions to American society throughout history.