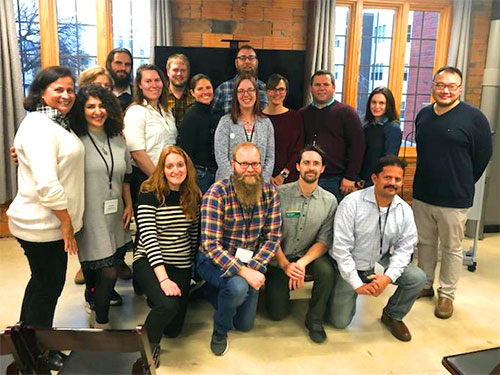 Going into it, attendees at CoSearch NDSU knew only a little bit about what was going to happen during the next day and a half. But by the end of the event, they had formed new collaborations and friendships with colleagues, some of whom they met for the first time.

“I didn’t know what to expect of CoSearch before I went. But I really enjoyed the experience of getting to know and work with faculty of diverse disciplines,” said NDSU professor Marisol Berti. NDSU assistant professor Paulo Flores added, “NDSU CoSearch was a very intensive and worthwhile 30 hours experience.”

Presented for the first time at NDSU in partnership with the Office of Research and Creative Activity and The Nice Center, CoSearch was co-founded by Texas State senior communications lecturer Michael Burns and is a byproduct of the Fargo startup culture he saw firsthand when he attended NDSU during graduate school. The philosophy behind the event is simple: Michael believes that many of the world’s problems could be solved by jump-starting an interdisciplinary process and breaking down silos that separate researchers. While Michael has conducted numerous sessions at Texas State, CoSearch NDSU was his first event held outside his home university.

The CoSearch event began as a networking event for attendees as they get to know each other and learn more about each other’s expertise. This process ensures that bonds begin to form immediately among the attendees with the hope that some will grow into potential collaborations. Pitching ideas followed, where each participant has an opportunity to present an idea related to the theme of “Farm of the Future." This fast-paced segment of the event was described by one attendee as “brainstorming at a rocket’s pace.” Michael has carefully infused his event with a considerable amount of fun competition and the pitch session contained equal amounts of visioning and friendly disagreements as ideas were discussed and voted upon.

After the ideas were narrowed down through the voting process, similar projects were combined and participants were given the opportunity to select a team and idea that interested them and in which they believed could have an impact. Soon 20 individual researchers had become four teams working on four different research ideas.

Meghan Duda, assistant professor of photography and design, discovered that an idea didn’t need to be from a STEM perspective to be considered. “The practice of making art involves examining questions from a variety of angles to find the most appropriate solution - not unlike disciplines within the STEM fields,” she said. “At CoSearch, I was able to witness this sentiment first hand…and the lens I provided sparked some excitement in the room that I hadn't expected.”

Meghan’s idea was one of the four the attendees selected to move forward and her team consisted of individuals from plant pathology, landscape architecture, agronomy and precision agriculture disciplines. Meghan appreciated how she could learn about the research process from her group. “Our research interests came together in a wholly unexpected way. I truly look forward to continuing the research proposal pitched by my group!”

The final step for the teams was to present their ideas in a concise, five minute presentation to a panel of judges from across industry and higher education positions in North Dakota. This panel included Amy Whitney (director of the UND Center of Innovation), Phil Wisecup (vice chancellor of strategy for the North Dakota University System), Scott Smidt (vice president of business engineering and operations for Midco), Sheri Anderson (associate vice president of research development at NDSU), James Leiman (senior manager of economic development initiatives at the North Dakota Department of Commerce), and Josh Marineau (assistant professor of Management at NDSU).

Judges selected the project “Bridging the Gaps Towards Valorizing Forages and Fiber Crops in North Dakota” as the winner with “Envisioning the Future Farm of North Dakota” as runner-up. However, in recognition of everyone’s hard work, the RCA office awarded all four teams with a number of hours to work with a proposal consultant. The next step for them will be to find a funding opportunity that fits their project and to write and submit a grant proposal.

“CoSearch NDSU showed the value of bringing together diverse individual perspectives to create really powerful ideas and bonds, even in a short span of time,” said Jane Schuh, NDSU vice president of research. “Given that the topic was related to farms, the perspectives of our extension center researchers, who interact with citizens and communities across North Dakota every day, were particularly welcome. CoSearch NDSU was very effective at integrating those voices and ideas into actionable plans that take full advantage of the breadth of expertise in our community of researchers.”

Marisol's experience was a positive one. She stated, “I definitely would participate again and I encourage everyone to participate in future CoSearch events. You won’t regret it!”