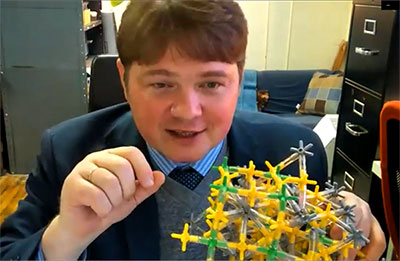 Dmitri Kilin, an assistant professor in the Chemistry and Biochemistry Department, College of Science and Mathematics at North Dakota State University, was recently awarded a National Science Foundation (NSF) CAREER Award. Kilin’s work is focused on understanding and predicting the control of photoreactions (chemical reactions driven by light) that utilize specialized lasers. His NSF CAREER Award will offer an environment for others to create new computational tools that will give researchers the ability to work towards higher efficiency solar cells.

Throughout the last decade, Kilin has researched and published extensively about photovoltaics and photoreactions. Photovoltaic effects occur when light is absorbed by a material and causes its electrons to be excited and moved to a higher-energy state while still contained in the material. The relationship between the structure of active materials and efficiency of the photo-induced charge transfer across the interface is an on-going quest in the community.

Kilin defines his work within a discipline comprised of a large group of researchers working to solve the world's energy problems by providing free and clean solar power.

"Think about a small area of a desert, perhaps 100 miles square, that is populated by 100% efficient solar cells," he says. "While the solar power collected by these cells would amount to a very small fraction of the entire solar energy received by the Earth, it could theoretically provide all the energy needed for the globe and replace all fossil fuel and nuclear power. Only solar power."

Kilin notes the main underlying problem is how to make solar power more efficient given that today's panels operate at only 10% efficiency with a current physical limit of about 33% single-cell efficiency. His research funded by the NSF CAREER award will involve creating software to allow other researchers to study photoreactions in a computational environment that is free from restraints of the physical world.

As a complement to his work on photovoltaic and photocatalytic solar energy conversion, Kilin has also studied the photoinduced processes at the interfaces of metal and semiconductor nanomaterials. His research has focused on theory and computational modeling of photo-induced dynamic processes of charge transfer, non-radiative charge carrier relaxation, and surface reactions at catalytic sites, as well as photo-degradation and photo-polymerization reactions. The last two problems and his novel methods to model them were highlighted by the NSF in the CAREER Award as filling the gap in both applied and methodology directions.

The son of a physicist and practicing scientist, Kilin considers his father a role model who showed him the value of passion and a dedication to research. Kilin received his MS from Belarus State University in Belarus and his PhD from the Chemnitz University of Technology in Germany. Following that, he served as a Postdoctoral Fellow at the University of Oregon, University of Washington, and University of Florida. He explains how the impact of research and discovery is built upon the discoveries of others and thus forms a kind of academic family tree. He points to how his work with his undergraduate advisor at Belarus State University (Krylov), his doctoral advisor in Chemnitz (Schreiber), and his postdoctoral advisors (Cina, Prezdo, and Micha) directly connected him to common practices in the field.

Kilin's education at Chemnitz University of Technology was particularly impactful in setting the direction of his future career through the chain of the academic tree of research. He notes how his work with Michael Schreiber, his doctoral advisor in Chemnitz directly connects him through this academic tree to two major founders in the field of theoretical physics: Werner Heisenberg and Niels Bohr, both research pioneers in the field of quantum mechanics theory.

For his NSF CAREER Award, Kilin plans to fill gaps in the computational investigation of laser-driven chemical reactions and thus improve understanding of basic processes and accuracy for predicting outcome of a reactions at extreme conditions while reducing costs and establishing standard approaches. The software he and his team will create will be able to predict and interpret the products of various reactions thus helping advance technologies that include energy conversion and storage and chemical sensing. One important potential result of his research will be the optimization of thin-film fabrication/deposition/growth technology which is important to the miniaturization of electronic circuits on both a nano and sub-nano scale.

While Kilin enjoys his work as a researcher, it's clear where his passion lies when he speaks of working with his students. "The size of NDSU is perfect for working directly with graduate students so I always look for opportunities to attract them to our programs at NDSU. I tell potential students that a benefit of coming to our program is working directly with research faculty."

Kilin says that their motivations of graduate students in his program are varied. "Some have a clear vision of their future career and want to acquire the skills that will help them find it. Others believe that research is the key to making the world better. Others are challenged by solving both physics and computational problems or enjoy simply trying to recognize and understand the basic principles that control the material world." The appropriate motivation, a combination of goals and plans, and quantitative factors such as GPA, publications are also important but a student's motivation is Kilin's primary priority and criterion for selecting right graduate student to accept into research group. "They must be curious," he states.

Kilin believes it's never too early to connect students to research and he does so even at an undergraduate level. To do this, he challenges all undergraduate students who take a class from him to participate in an exercise of researching and reporting their findings by writing a scholarly article.

The process begins when Kilin presents his students each with a small but unique research problem that no one in the world solved before. By giving them only a small novel issue to work on, he teaches them, much like with his own solar energy research, that they don't have to take on an entire large issue but must first focus on a part of it. He then suggests the tools and approaches they will need and gives each student time to conduct research activities designed to discover the answers. They are then asked to present their findings in a written scholarly article submitted to a mock journal created by Kilin. The journal's "editors" are comprised of graduate students who have joined his research group earlier. "In the real world, reviewers are trained to be very critical and I expect the same from my editors," he adds.

After the articles are edited and revised, Kilin publishes physical copies of the mock journals and provides his students the opportunity to defend their work in front of other students and select guests.

“The reports I have my class attendees create are the seeds of true scientific discovery and by planting them early, I'm trying to prompt their young scientific brains to get enthused by the process." Besides the learning they gain in the process, the reports become important first drafts of work that many students have officially submitted later in the careers.

Given Kiln's drive for helping students find their own individual passion for research, his NSF CAREER Award includes an educational mission that supports and outreach activities and programs. It specifically addresses the needs of North Dakota tribal college students via the Nurturing American Tribal Undergraduate Research and Education (NATURE) Program and provides opportunities for high school students participating in the PICNICS (Parents Involvement with Children, Nurturing Intellectual Curiosity in Science) program hosted at NDSU.

The continuing success of NDSU researchers in creating programs from NSF awards like Kilin's serve to attract a large number of talented and motivated graduate students to NDSU to complete their STEM doctoral degrees. "NDSU's size enables these students to work directly with researchers," said Kilin. By pursuing world-class competitive research and obtaining doctoral degrees many doors are opened to their successful future careers in industry, at academic institutions, or at governmental national research labs.

Dmitri Kilin’s research, entitled "Investigation of Laser-driven Chemical Reactions by Molecular Dynamics" is funded by Award No. 1944921 from the National Science Foundation.