The project will examine and understand how hybrid combinations of widely dispersed poplar species--black cottonwood and balsam poplar--could be effective for climate-adapted biofuel programs across the United States. Poplar trees were selected for the research study given their rapid growth and heartiness, and hybrids comprise the vast majority of trees found in operational plantations today due to their superior growth. However, predicting the performance of hybrids is challenging given the vast variety of genetic combinations that may exist for these long-lived trees. By collecting, cloning, 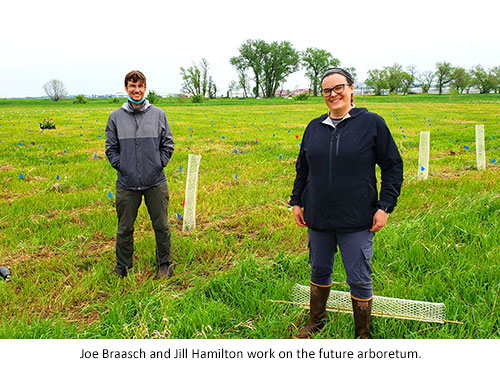 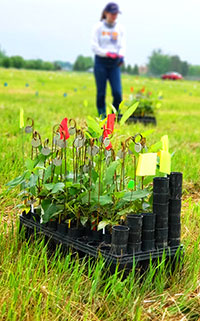 genotyping, and planting specific hybrids across a range of environments, this study aims to more quickly determine which trees have traits that could significantly benefit poplar breeding programs.

The four year $2.5 million poplar hybrid project is a collaboration among researchers at Virginia Polytechnic Institute, University of Vermont, University of Maryland, and NDSU. The poplar hybrids were collected during the winter of 2019/2020. Hamilton’s research team targeted areas in British Columbia and Alberta, while other teams covered different areas from Oregon to Alaska. They harvested dormant cuttings from trees which were then sent to Virginia Tech to be propagated and genotyped. Hamilton’s group drove to Virginia in May to bring home the trees and they were planted later in the month. Additional hybrids will be planted in nearly 20 arboreta and universities from coast to coast. 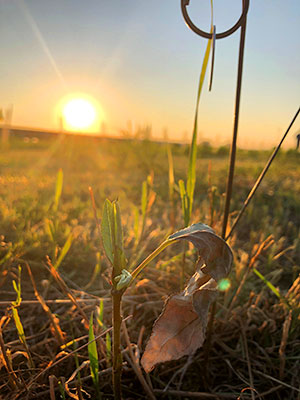 Planting an arboretum has long-ranging effects on an area. “We’re just a blip in the lifespan of prairie ecosystems,” comments Hamilton. “While the work we do now will have an immediacy of impact, we also have a responsibility to the future. Our climate is rapidly changing and what will it look like in a century or even in a decade? The work we’re doing will increase our ability to predict how a species can respond to different climate conditions”

Besides the positives of creating a new arboretum for NDSU, the research program also has additional benefits as the area develops. The natural lab environment will provide many educational opportunities and the researchers will work with ArbNet, an international arboretum accreditation and networking program, to develop a middle school curriculum focused on how traits vary in poplar trees originating from diverse environments. Students will be exposed to biological responses to different environments, experimental design, and hypothesis testing. Given the long lifespan of the project, the team will also provide interdisciplinary training to the next generation of scientists, spanning field ecology, genomics, and computational biology.

The project holds great potential to learn how we can best leverage diversity within and across species in the local ecosystem. “The recent changes in our climate have had dramatic impacts on the species within it,” notes Hamilton. “Many local tree species have been really suffering over the last decades. Variation is key, and this project hopes to identify which genetic combinations can counter those changes. We’re at the very start of a unique and decades spanning research environment with much promise for both NDSU and the area as a whole.”