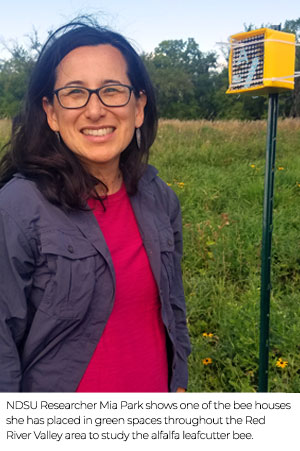 NDSU post doctoral research fellow Mia Park is studying our local bees. While 90% of the 250 species of North Dakota native bees are solitary without colonies and thus have to build their own shelters, researchers have traditionally studied and considered them within rural settings. Mia is interested how urban settings can become beneficial refuges for pollinators.

Mia works in the USDA / NDSU lab of biological sciences faculty members Julia Bowsher and Kendra Greenlee. While she notes that she’s liked insects since she was young and always has wanted to save the world, her interest in rural vs. urban settings for pollinators began when she was doing her graduate studies at Cornell. After graduation, she took a position at the University of North Dakota. The position involved more teaching than research so she was glad to join the lab at NDSU given her position is completely dedicated to research.

Mia’s research concentrates on how environment and nutrition impact stress levels of pollinators. Mia asks questions about the way in which our land management practices affect pollinators at different taxonomic resolutions/scales such as how the entire community of wild pollinators – their abundance and diversity – respond to stressful and beneficial human activities and how reproduction and nutritional health of a single indicator species respond to the same factors.

Considering herself a field ecologist, Mia likes to think about how changes to our ecology affect species. “I’m interested how outreach to various groups from agricultural producers to students and researchers to the public can have an impact,” she says. “It’s been wonderful [at NDSU] as my interests fit the needs of team and I have the intellectual freedom to pursue my research.” 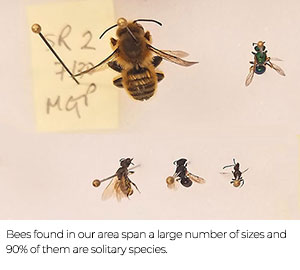 Mia is currently studying the alfalfa leafcutter bee (Megachile rotundata). The non-native species is an efficient pollinator and is imported into states including North Dakota by agriculture producers at the rate more than 70,000 gallons annually. One issue facing the agriculture industry is that many of the bees struggle to reproduce so the process is be repeated each year. Mia considers the alfalfa leafcutter bee as a barometer of the overall pollinator community’s health. “There is so much ‘noise’ in nature that it can be difficult to determine what’s really going on,” she notes. “Alfalfa bees are sentinels or good control indicators that allow us to measure how our pollinators are doing overall. What happens to them is a reflection of what’s happening to all the other species.”

Earlier this year, Mia begun placing alfalfa leafcutter bees houses in urban greenspaces and monitoring how they prosper. Given her niche is urban settings, she sought out areas that met the criteria of being close to or in an urban area and composed of enough native plant species to fulfill the natural needs of the pollinators. 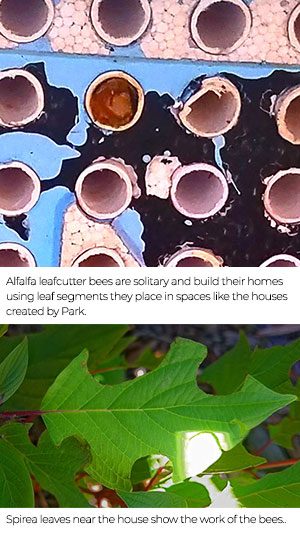 “Creating urban pollinator areas can be difficult as areas you would first consider (like city parks) are typically highly manicured,” Mia points out. “It’s pretty difficult to find places that can be planted with pollinator crops as some are considered weeds and aren’t welcomed in a traditional urban setting.” She found the perfect environment through land managed by an Audubon Dakota program.

The Urban Woods and Prairie Initiative is a project of Audubon Dakota, Fargo Parks District, Buffalo- Red River Watershed District and the cities of Fargo and Moorhead. The goal is to restore prairie areas in Fargo and Moorhead and there are currently 1,000 acres that were previously flood buyout sites along the Red River enrolled within the project. As the main goal of the initiative is to restore ecological functions to the area, Mia found a perfect home to study pollinators.

For her study, she put bee houses in five locations enhanced with flowers (or pollinator plantings), five that were primarily grasses, and another five in classic urban parks. She and the lab’s students then conducted surveys to count the number and types of pollinators, as well as flowering resources. They also introduced a consistent number of alfalfa leafcutting bees to each site and monitored nest establishment and reproduction rates within specially-built pollinator houses. Flowering resources were also surveyed within a given radius of the pollinator houses. Offspring nutritional status will be assessed in the lab this winter.

Overall, Mia is finding that abundant and diverse flowers do indeed support alfalfa leafcutting bee reproduction and wild pollinator community abundance and diversity. Enhanced sites did not necessarily have more flowers than other sites due to poor establishment and flooding. Restoring native flowers to grasslands is a challenge echoed by many of her colleagues across the country. Mia was most surprised to find benefits of weedy forbs – especially noxious weeds like Bull thistle – for pollinators. “The weeds are filling an empty niche in these riverine grasslands where native plants do not grow.”

Even though they are susceptible to spring flooding, Mia notes that the Audubon areas hold the best possible opportunity to nurture pollinator insects near urban populations while providing a unique opportunity to examine how land management impacts pollinators in both positive and negative ways. Her research will continue next season.

Mia hopes to find ways to introduce pollinator crops in urban environments. She points to Toronto as an example of a community that has embraced pollinators within the city. She sees an even better opportunity in Fargo. “Many cities use their empty lots for pollinator spaces. We have the opportunity to utilize a 28 mile stretch land near the Red River as a permanent prairie ecosystem that can nurture a large number of pollinators.”