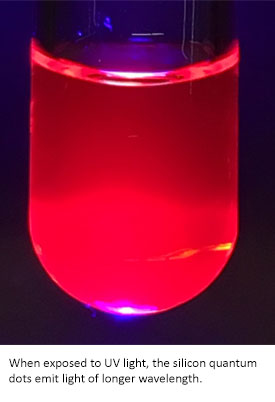 NDSU researchers recently developed a new method of creating quantum dots out of silicon, one of the most utilized semiconductors in the world. Quantum dots, or nanocrystals, are tiny nanometer scale pieces of pure semiconductor that emit light when their electrons are exposed to UV light. The most common application of quantum dots is in QLED displays. Through their use, digital displays have become brighter and much thinner, resulting in improvements to television and, potentially, cell-phone technology.

Silicon is abundant and nontoxic and silicon quantum dots have their own unique appeal. While traditional methods of creating silicon quantum dots require dangerous materials such as silicon tetrahydride (silane) gas or hydrofluoric acid, the new approach developed at NDSU uses a liquid form of silicon to make the tiny particles, all at room temperature using relatively benign components. The team, led by Erik Hobbie, Professor of Physics, Coatings & Polymeric Materials, and Director of the Graduate Program in Materials and Nanotechnology at NDSU, relied on the discoveries of NDSU Distinguished Professor of Chemistry Philip Boudjouk, who developed the liquid precursor (cyclohexasilane or Si6H12). NDSU alumnus Todd Pringle was the lead researcher on the project. Pringle is the president of Lumacept Inc., a company that produces the only available coating designed to reflect germ-killing ultraviolet light, called UV-C. Lumacept is currently helping health care providers decontaminate and re-use their personal protective equipment.

These materials are already being used for solar energy applications, where they are blended into traditional windows to create solar panels that remain transparent while serving as active collectors of photovoltaic energy. Hobbie notes that silicon quantum dot technology could also be used in medicine by coating the tiny particles with organic molecules to create nontoxic fluorescent biomarkers.

“This approach has the potential to take the production of these materials to a new level of quality and scale,” Hobbie says. “I believe this is the best work I’ve been involved with in my career and I’m very proud that it was done at NDSU.” The work was supported by the National Science Foundation.

The team includes researchers from North Dakota State University, the University of Minnesota, Northwestern University, the National Institute of Standards and Technology, and Argonne National Laboratory. Their research paper “Bright Silicon Nanocrystals from a Liquid Precursor: Quasi-Direct Recombination with High Quantum Yield” was published by the American Chemical Society in the April 2020 journal ACS Nano: https://pubs.acs.org/doi/full/10.1021/acsnano.9b09614