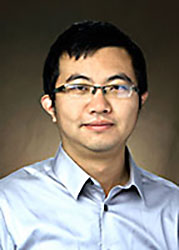 Zhongyu Yang, assistant professor in the Chemistry and Biochemistry department at NDSU, was recently awarded a National Science Foundation (NSF) Career Award. Yang studies the structural information of protein molecules impacted by confined environments. He hopes to better understand how spatial confinement (such as is found in natural cell structures) impacts protein functions.

“The majority of our understanding of proteins is in a beaker in a solution but in life, cells are crowded places and that has an impact on molecules such as proteins. Until now, nobody has been able to mimic that environment to comprehensively study the stresses and reactions that occur naturally.”

Zhongyu joined NDSU in 2015 after receiving his BS from the University of Science and Technology of China in 2004 and his PhD from the University of Pittsburgh in 2010. He also served as a post-doctoral fellow at the University of California, Los Angeles through 2015. He notes that around that time the idea came to him to consider the impacts of biological confinements on proteins. “I noticed that there was a knowledge gap in this area and an idea sparked in me to come up with a method to mimic the confined conditions in cells,” he said.

Zhongyu’s research involves creating the biological confinement structures and then monitoring any changes to proteins using electron paramagnetic resonance (EPR) spectroscopy, a technology he first learned at Pittsburg and then continued working with at UCLA. Given that only a small number of EPR centers are set up across the country, Zhongyu sees his EPR experience as a unique qualifier to his research.

His path to developing this EPR expertise received assistance from his PhD advisor Professor Sunil Saxena, who is the chair of the Chemistry department at the University of Pittsburgh. “After I received my PhD, Sunil sent a recommendation letter to UCLA to help me find a post-doc position in Professor Wayne Hubbell’s research group,” Zhongyu recalls. “I was pleasantly surprised when Wayne offered me the position. The Hubbell group at UCLA is considered as one of the best EPR groups in the world and I was proud to be able to spend nearly five years working with and learning from Wayne.”

The training Zhongyu received prior to joining NDSU has been a key part of his success. After joining the NDSU Chemistry and Biochemistry department, his work suffered a four month shutdown due to a fire. “During this time, I collaborated with a friend at the University of South Florida,” he said. “The time when I wasn’t able to be in my lab could have been non-productive but instead it allowed me to consider other research areas that I may have overlooked. It was a case of making the best out of a bad situation.”

Zhongyu believes partnerships are important for all researchers. “Nowadays, collaborations are key to good research. You need to put yourself out there and find the people who can help you learn and avoid mistakes.” As his work is equally applicable to plant and food sciences as well as structural biology, he’s found equal interest with the NDSU plant sciences and biology departments.

Zhongyu’s NSF Career Award includes working with North Dakota undergraduate and high school students in a summer student research exchange program. The program will be a partnership between NDSU and the United Tribes Technical College in Bismarck and will also include programs to stimulate science interest for local elementary school students.

Zhongyu sums up his advice to new researchers. “First, be aware of quality over quantity when publishing your research. Second, look for novelty in your research and try to be the first person working on your ideas. Last, if you’re working with the NSF, get to know your program officer and volunteer to be on panels – even learning how other proposals are rejected will help you in many ways.”

Zhongyu Yang’s research, entitled "Proteins under Confinement: Revealing the Impact of Spatial Restrictions on Enzyme Structure, Dynamics and Function," is funded by Award No. 1942596 from the National Science Foundation. The project is jointly funded by the Molecular Biophysics cluster of the Division of Molecular and Cellular Biosciences (MCB) and the Established Program to Stimulate Competitive Research (EPSCoR).