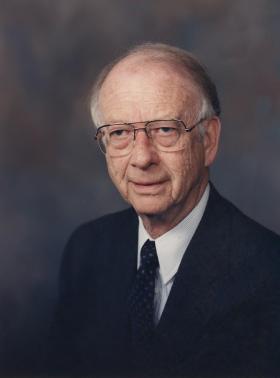 Each year the Bloomquist Lecture series features a distinguished speaker in the from the world of cooperatives.

Al Bloomquist is often referred to as "the father of the Red River Valley's farmer-owned cooperative sugar industry" and "the man who started it all." Born in Willmar, Minnesota, Bloomquist received his Bachelor's degree from Gustavus Adolphus College in 1943.

He began his career in the newspaper business, but left it for the sugarbeet industry in 1955 when he become Regional Manager for Western Beet Sugar Producers, the public relations arm of the beet sugar industry. He became Executive Secretary of the Red River Valley Sugarbeet Growers Association in 1961 when the sugar industry was thriving and growing in the Valley. By the late 1960s, the sugar industry was in decline. In the early 1970s, it was apparent American Crystal Sugar (ACS), then headquartered in Denver, was no longer interested in expanding in the Red River Valley. In 1972, Bloomquist, representing are growers, wrote to the President of American Crystal Sugar, offering to purchase the company. ACS agreed and in 1973, America's first beet sugar grower-owned cooperative was formed. 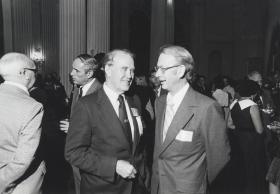 Bloomquist became the Vice President of Public Affairs and directed the company's local, regional, and national public affairs. He acted as the primary spokesperson for American Crystal Sugar and was nationally-known as an expert on the needs and goals of the U.S. sugar industry. Because of his reputation for integrity and being one of the most knowledgeable people in the country about the sugar industry, Bloomquist's counsel was often sought by congressmen, bureaucrats, and presidents. Bloomquist was the original publisher of the "Sugarbeet Grower" magazine, a nationally-recognized industry publication. In 1977, he received the highest honor of the sugar industry, the Dyer Memorial Award as "Sugar Man of the Year". At age 56, he was the youngest person ever to receive the award. He was elected President and CEO of ACS in 1990 and served until he retired in 1992. Mr. Bloomquist passed away in 2012.

American Crystal Sugar has grown to be a cooperative that produces 16 percent of the country's sugar. The company is owned by approximately 2,900 shareholders and employs 2,000 men and women in the states of Minnesota and North Dakota. The company generates approximately $1 billion in sugar sales annually.

Beth Ford, president and chief executive officer of Land O’Lakes Inc., was the featured speaker at the 27th annual Aldrich C. Bloomquist Lectureship on March 28 at the North Dakota State University. Like the company she leads, Beth her career was built on a diverse and broad portfolio and a keen interest in innovation.

Mr. Thomas Halverson, President & Chief Executive Officer of CoBank
“A Discussion About the Future of Cooperatives”

Tom Halverson is president and chief executive officer of CoBank, a $129 billion bank based in Denver and one of the largest private providers of credit to the U.S. rural economy. As CEO, Mr. Halverson is responsible for implementing the bank’s strategic and business direction as set by the Board of Directors. Previously, he served as CoBank’s chief banking

officer, with responsibility for all lending operations.

2013 Bloomquist Lecture - AgriBank: Serving Those Who Serve Rural America in These Volatile Times

2010 Bloomquist Lecture - Search for Leadership in a Post-Crisis Malaise

2004 Bloomquist Lecture * Changes and Challenges of the Sugar Beet Industry

2003 Bloomquist Lecture - Turbulent Times: Reflections of the Role of Cooperatives in the Economic Organization of America

Robert Bergland, Member, University of Minnesota Board of Regents

2000 Bloomquist Lecture - New Generation Cooperatives and the Future of Agriculture

1996 Bloomquist Lecture - World Trade and Market Globalization: The Other Parts of the Equation

1995 Bloomquist Lecture - Gazing into the Crystal Ball: Career Opportunities in the Food and Agriculture Industry in the 21st Century