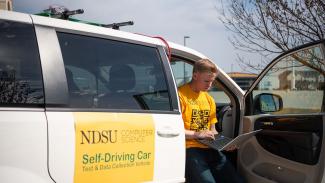 An example is the computer science department’s autonomous car research. A team of NDSU undergraduate students is working to build the next generation of self-driving cars, with the ultimate goal of creating a vehicle that can sense and interact with the environment around it – including other cars, pedestrians and road signs. The finished product could create a new standard of safety for autonomous vehicles.

The self-driving car project has included about 25 students from computer science, computer engineering and electrical engineering since it began in 2016. Some students participate just for fun, while other students use it to fulfill a project component in class or for research credit. Team membership has helped several students obtain internships tied to an area of the project they worked on, increasing the chances of landing a top job after graduation.

“Doing research like this really sets you apart when you are trying to get employed. And this has been something that’s helped my overall understanding of what I’m learning because it’s something to which I can directly apply my knowledge,” said Kevin Setterstrom, a senior in electrical engineering who will remain at NDSU to work on the project while earning a master’s in computer science.

The project is open to any student—undergraduate and graduate—interested in computer technology. The project is still in its early stages but has already hit several milestones. The next steps will hopefully revolutionize self-driving car safety worldwide.

Apply now as an undergraduate or graduate student at NDSU.