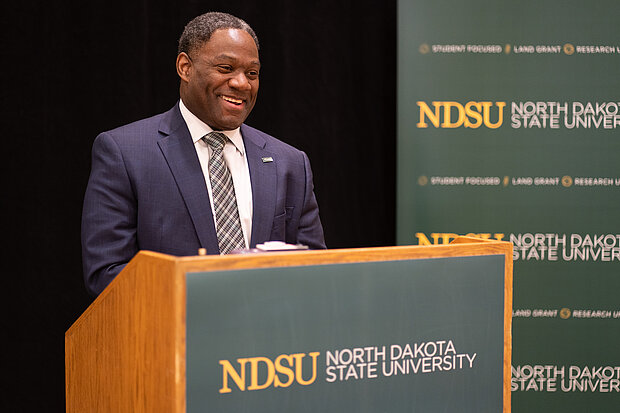 NDSU presidential candidate Michael Tidwell said he would be a collaborative leader focused on positively impacting students and communities in North Dakota. He made his comments during his open forum presentation on Jan. 28 at NDSU. Tidwell, the immediate past president of the University of Texas at Tyler, is the third of five candidates who will visit campus for interviews and meetings.

“You all are passionate about student success,” Tidwell told the in-person and online audience. “I’ve realized very quickly that you all are as passionate here as an institution at NDSU about helping your students achieve both their personal and professional goals as we were at the University of Texas at Tyler. … The goal is to be of service.”

Tidwell said he doesn’t believe the next NDSU president should have a preconceived vision for the university before coming to Fargo. Instead, he said the next president should work with the entire campus to create a collaborative plan. “That vision needs to be set as a collective campus,” he said. “If the president comes in and sets a vision for the campus, that becomes the president’s vision. We’ve got literally thousands of employees on this campus and many, many more across the state through our Extension program. We need to, as a campus community, create a plan. Because, in large part, what you will find is that when people create something, they support it.”

Tidwell has been a management and research consultant since 2003 and completed an Executive Internship with CHRISTUS Trinity Mother Frances Health System. During his career, he has published several scholarly journals and addressed many national and international conferences. He’s served on the boards of Ann Arbor Spark Business Development Committee, Tyler Economic Development Council, Tyler Chamber of Commerce and the East Texas Center for Nonprofits.

During his time at University of Texas at Tyler, Tidwell helped the school improve to an R2 research classification and reach record freshman enrollment two years in a row. Tyler, which has about 10,500 students, is the fastest-growing campus in the University of Texas system.

He said he understands the value of working closely with North Dakota tribal colleges, using online courses to boost enrollment, fundraising, creating relationships with communities across the state and supporting humanities and the arts.

“I believe in team,” Tidwell said. “We have a team here. We’re all working together. We all need to know what the goal is. If you have a football team and the quarterback is running one play, the offensive line thinks the play is something different and the running back does something different it will be chaos. We all need to be on the same page, running the same play. We all have different positions, but we’re all going the same way.”

Other candidates also are slated to hold open forums, which are scheduled for 10:30 a.m. in Memorial Union’s Oceti Sakowin Ballroom. Hesham El-Rewini, provost and senior vice president of academic affairs at Marymount University in the Washington, D.C., area, is set for Wednesday, Feb. 2. Mary Holz-Clause, chancellor for the University of Minnesota Crookston and acting executive chancellor for Crookston and University of Minnesota Morris campuses, is scheduled for Thursday, Feb. 3.

The NDSU Presidential Search Committee will recommend an unranked slate of finalists to the State Board of Higher Education. The board will conduct final interviews on the NDSU campus on Wednesday, Feb. 23, with the selection of the next NDSU president announced thereafter. It is anticipated that the new NDSU president will assume office in June.

For more information or to watch video of any of the candidate presentations, visit the Presidential Search web page.