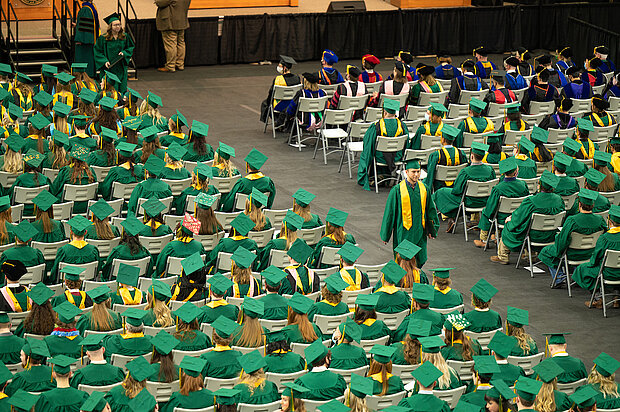 NDSU’s spring commencement ceremonies are scheduled for Saturday, May 14, at 10 a.m. and 2 p.m. in the Fargodome.

The 10 a.m. ceremony is for the College of Arts, Humanities and Social Sciences; College of Engineering; College of Human Sciences and Education; and interdisciplinary studies.

The 2 p.m. event is for the College of Agriculture, Food Systems and Natural Resources; College of Business; College of Health Professions and College of Science and Mathematics.

A total of 1,303 students have indicated they intend to participate of the 2,033 who are eligible.

“Commencement is a time of celebration,” said Jackie Schluchter, NDSU associate registrar. “Our campus is proud of the accomplishments our graduates have achieved and we are excited to welcome them into the alumni community.”

Graduating senior and class representative Rose Yang will speak at the 2 p.m. ceremony. Yang is receiving her Bachelor of Science in pharmaceutical sciences. Highly active as a student, she is the historian for the Phi Lambda Sigma leadership society, a researcher and social media manager for the “SNAP the Stigma” mental health event and a member of the Green Bandana Project. She also was a College of Health Professions mentor and served on the pharmacy curriculum committee. In addition, she was vice president for Weible Hall and organized a homeless shelter event to gather necessities for the homeless. Yang earned the CVS Health Scholarship and the Ben Simons Scholarship, and currently interns for the Family Healthcare ambulatory care pharmacy. She will continue her education at NDSU, seeking her Doctor of Pharmacy degree with the career goal of working in an ambulatory care setting. Her parents, Chue Yang and Chong Lor, are from Laos, and she was raised in Brooklyn Park, Minnesota.

Micah Nicolai, a music major from New Rockford, North Dakota, is set to be the soloist during the 10 a.m. ceremony. He is earning his Bachelor of Music in vocal music performance. Nicolai has been involved in multiple choral ensembles at NDSU, including NDSU Concert Choir, Madrigal Singers, Bison Arts Singers and several recital choirs. He has performed leading and ensemble roles in numerous NDSU Opera and Theatre NDSU productions including, most recently, Aeneas in “Dido and Aeneas” and Sir Danvers Carew in “Jekyll & Hyde.” Nicolai is a member of the Challey School of Music Student Council, College Music Society and the NDSU Hacky Sack Club. He has studied voice under Robert Jones, professor of voice in the Challey School of Music and Kelly Burns, assistant professor in the Challey School of Music. His career goals are to work professionally in operatic productions and musical theatre productions.

The soloist for the 2 p.m. ceremony will be Emily Paulson, who is earning her Bachelor of Arts in music with an emphasis in voice. During her time at NDSU, she has performed with multiple ensembles, including the University Chamber Singers, NDSU Madrigal Singers, NDSU Concert Choir and NDSU Opera. Paulson, who is from Bowman, North Dakota, recently starred as The Spirit in NDSU Opera’s fall production of “Dido and Aeneas” and as a soloist in NDSU’s annual performance of Handel’s “Messiah.” Paulson also was a chorus member in two recent productions with the Fargo-Moorhead Opera and is an active member in College Music Society. She studied voice under Kelly Burns, assistant professor in the Challey School of Music. This fall, she will be starting her studies for her master’s degree in library science with a specialization in music at Indiana University-Bloomington. Her career goal is becoming a music librarian.

During the 2 p.m. ceremony, North Dakota Wheat Commission administrator Neal Fisher is scheduled to be presented an honorary doctorate of agriculture.

Fisher’s long and distinguished career with the commission has had a dramatic and lasting impact on North Dakota agriculture. He joined the commission in 1978 and rose to be named administrator in 1998. Fisher works directly in export market development, research, quality assurance, transportation and trade policy to improve the global competitiveness of North Dakota wheat. He coordinates commission policies and actions on wheat industry issues, and has provided market development and technical assistance services to customers in more than 80 countries for nearly four decades.