Larry K. Ellingson, (B.S. Pharmacy, ’69) will be recognized for his contributions to the Academy of Nutrition and Dietetics with an Honorary Membership at their annual meeting in October in Indianapolis. 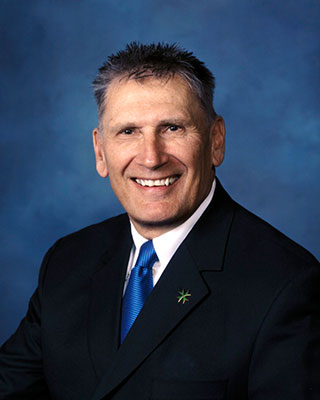 roles and served on their board in 2007-2008.  I am pleased to be considered an “Academy” member with this honor,” said Ellingson.

His career has been marked by a commitment to advancing the field of treatment for diabetes as well as helping advance education, NDSU, and students attending the university.

Ellingson is currently president and CEO of Global Diabetes Consulting, Fountain Hills, Arizona. He is best known for his career achievements in the medical and medical marketing industry with special accomplishments in the field of diabetes awareness. While attending NDSU, he was active in various organizations including the Tau Kappa Epsilon fraternity, Bison Baseball, and Alpha Phi Omega.

His career began with a very strong recommendation from then NDSU Dean of Pharmacy Phil Haakinson to Eli Lilly and Company. Ellingson began as a sales representative.

He cites his experiences at NDSU and growing up in North Dakota as the foundation for his work ethic, “people are everything; the work ethic here is infectious and it stays with you forever,” said Ellingson in a previous interview.

Ellingson has also served as an Advisor to the Pharmacy School at NDSU and as an NDSU Trustee. In addition, he served as a board member of the NDSU Research and Technology Park. NDSU named Ellingson An Outstanding Alumni of the Year in 2007 for his contributions to the field and to the university.

“We greatly appreciate the expertise Larry has provided assisting with strategies, planning and programs to help advance NDSU Pharmacy to educate the next generation of pharmacists and show students how their degree can help launch an exceptional career,” said Charles D. Peterson, dean of the NDSU School of Pharmacy and College of Health Professions.

Ellingson achieved executive status, but it wasn’t until the 1990s that he began what he describes as his most rewarding work—fighting for diabetes awareness, prevention and cure.

His list of achievements include being the first and only non-scientist to receive both the President’s Award and the Lilly Research Award in 2001 for contributions to diabetes research. In 2001, the Eli Lilly Company created the Ellingson Legacy Award to honor those who provide outstanding service to the customer and Ellingson, himself, was the first recipient.

In 2013, Ellingson co-founded the National Diabetes Volunteer Leadership Council NDVLC.org. The group supports people affected by diabetes, working to ensure that people with diabetes have access to safe and affordable medications to manage their disease in the communities in which they live. NDVLC hosted a 2019 Congressional briefing updating health care teams and Congress on developments emerging in diabetes. The group’s top priority is reducing insulin costs. NDVLC works to advance effective, affordable health care and a discrimination-free environment for every person affected by diabetes.

The Academy of Nutrition and Dietetics recognizing Ellingson’s contributions in October 2020 is the world’s largest organization of food and nutrition professionals. It represents more than 100,000 credentialed practitioners. In addition to Ellingson being recognized as an Academy member, Esther Myers, NDSU College of Human Sciences and Education Distinguished Alumna and dietetics adjunct professor, will receive the Marjorie Hulsizer Copher Award, the highest honor given by the Academy of Nutrition and Dietetics at the group’s annual meeting in October.