The 1991 U.S. National Beef Quality Audit, the first quality audit of beef carcasses, detailed areas where beef was falling short of the final customer's expectations. The audit determined that there was nearly $280 in quality defects for the average fed animal marketed. The majority of the loss was due to excess fat, lack of marbling, and other carcass defects. Figure 1 details the average losses due to taste, management, decreased yield, and carcass weight. 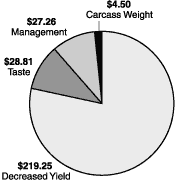 Recommendations:
To recapture some of the lost value of beef cattle, producers should:

The objectives of the 1995 National Beef Quality Audit were to: 1) conduct an audit of the quality of slaughter cattle, including their carcasses and dress-off and offal items; 2) establish baselines for quality shortfalls and identify targets for desired quality levels by the year 2005; 3) assess whether or not progress had been made in correcting deficiencies and reducing quality concerns when compared to the results of the 1991 audit.

The 1995 audit concluded that an average of $137.82 was lost per head of fed beef marketed, as detailed in Figure 2. To recapture some of this loss, the industry needs to increase red meat yield, enhance taste and tenderness, and improve methods of management. 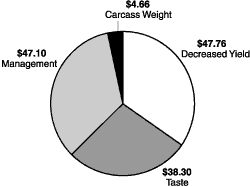 Increasing red meat yield could regain about $47.76 of the lost value. The audit suggests this be accomplished by producing carcasses that have less trimmable fat. The audit also suggested improving cutability of carcasses.

To enhance taste and tenderness of the final beef product, the audit suggested beef producers lower the age of cattle by minimizing the number of bullocks and heiferettes. They also suggested that fed cattle have sufficient amounts of marbling before slaughter.

The audit addressed specific management practices that could improve the quality of the final product. These practices included reducing injection site lesions by giving all injections in the neck, decreasing hide problems, dehorning, castration, decreased bruising, and lowering the overall incidence of dark cutters.

Dark cutting beef is believed to be the result of reduced sugar content of the lean muscle at the time of slaughter. The dark color of the lean associated with "dark cutters" is present in varying degrees, from barely evident to lean which is nearly black in color. Although there is little evidence indicating the "dark cutting" condition has any adverse effect on palatability, it is considered in grading because of its effect on acceptability and value. Depending on the degree to which this characteristic is developed, the final grade of carcasses which otherwise would qualify for the prime, choice, or select grades may be reduced as much as one full grade.

Recommendations for recovering lost value of non-fed or cull animals:

Non-fed animals are extremely valuable economically to the individual operation as well as the beef industry. The sale of cull bulls and cows account for 15 to 20 percent of a typical beef cattle producer's income. Therefore, producers should pay considerable attention to the health and quality of cull animals they market to receive the full profit potential from the sale of these animals.

Non-fed beef is very important to the entire beef industry. Roughly 6.4 billion pounds of non-fed beef was consumed in the United States in 1994. Beef products from non-fed animals included primals, sub-primals and ground beef. In the United States, ground beef accounts for between 43 and 44 percent of the beef consumed. Contrary to popular belief, not all beef from non-fed animals is marketed as ground beef. Examples of primal and subprimal usage from non-fed beef carcasses include ribeye rolls that are often shaved and used for philly steak sandwiches, flats (outside rounds) which are often sold in pressed form or cooked and marketed as deli meat, and ribeyes, strips, and tenderloins which are generally sold to "family" steakhouses, casinos, and airlines.

The 1994 Non-Fed (Cull) Beef Quality Audit suggested managing, monitoring, and marketing cull animals properly as methods for regaining some of the value lost in cull animals, as depicted in Figure 3. 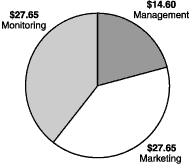 Current studies are finding that injection sites contribute to large defects in the rounds of non-fed beef. Injection site lesions were found in 28.7 percent of all beef cows and in 58 percent of carcasses from dairy cows. These rounds from non-fed beef are extremely important economically to the beef industry. These are commonly processed and marketed as whole muscle products and sold as deli roast beef or as fast food sandwiches. Lesions are often located deep in the muscle. They are not found in the normal fabrication process, and may not be discovered except by the end user of the product.

The non-fed audit suggested that producers remember the "Three M's" (Manage, Monitor, and Market) when it relates to cull animals. Managing non-fed cattle to minimize defects and quality deficiencies, monitoring the health and condition of cull cattle often and in a timely fashion, and marketing cattle in a timely manner.