This page was adapted from the article, "Cutting Hay for Horses – Watch Out for Poisonous Blister Beetles!," which appeared in Crop & Pest Report on June 30, 2022. 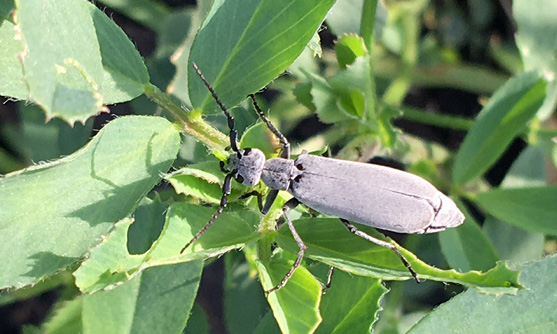 Ash-gray blister beetle on a leaf 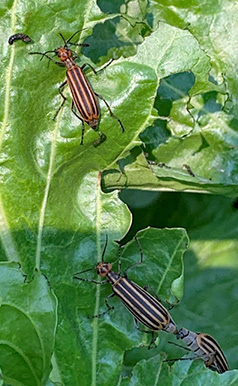 Most blister beetle species have one generation per year. Adults become active in early to mid-summer and females lay eggs in the soil. Eggs hatch in about two weeks into larvae called triungulins. Epicauta larva are beneficial insects and are effective predators of grasshopper eggs. Blister beetles overwinter in soil as larvae. Field reports indicate that blister beetles are high again in 2022 (like 2021) in most areas of hay production due to high grasshopper populations. Adult blister beetles are attracted to blooming alfalfa fields and weeds (goldenrods, dandelions). Adults are active June through September and will feed on nectar, pollen, leaves, stems and flowers.

The most severe threat from blister beetles is their poison called cantharidin, which is toxic to people and livestock, especially horses. Cantharidin oil is released when beetles are crushed and even dead beetles have high levels of the toxin that does not weaken. Cantharidin is highly toxic and irritates the gastrointestinal and urinary tracts, which can lead to death in horses. It is estimated that about 30 to 50 striped blister beetles could be potentially lethal to horses. Fewer beetles cause sores or blisters on tongue and mouth, colic, diarrhea, bloody feces, depression, elevated temperatures, increased heart rate, increased breathing rate and dehydration. Poisoned horses often place their muzzle in water without drinking.

Scouting:  Blister beetles are difficult to scout for since they are mobile and gregarious, and often congregate in field edges or certain spots in a field with flowering weeds. In some instances, blister beetles feed for a short period of time and then migrate to other areas of the field or to new fields. After the alfalfa is cut, they often move out into blooming canola and other blooming field crops. 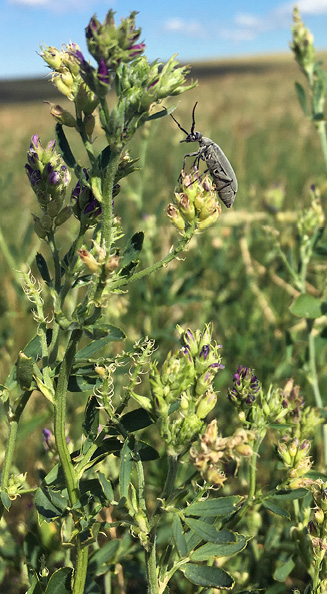