This page was adapted from the article, "NDSU Breeding Programs using Unmanned Aerial Vehicles (UAV) and Robots," which appeared in Crop & Pest Report on August 4, 2022.

NDSU crop breeding programs are of critical importance as they focus on developing improved varieties specifically adapted for our growing region. A released variety combines many of the desirable traits of economic importance for a specific crop. However, plant breeding is a multi-year long-term effort requiring multiple steps including hundreds of crosses annually, evaluations at multiple locations, and selection of superior genetic material. This breeding pipeline is a cumbersome and tedious effort to find a breeding line with all desired traits. Nonetheless, the contributions of plant breeding to crop productivity are widely demonstrated.

Plant breeders are constantly looking for methods and tools to improve selection efficiency (cost, time, effort, etc.). Integrating methods/tools as basic genetics, genomics, agronomy, physiology, and pathology/entomology, among others, have improved the selection process. Marker Assisted Selection (MAS), high throughput genotyping, and evolving genomic tools allow breeders to track some specific genes of economic importance within the breeding pipeline. The current bottleneck for efficient selection in a breeding program is the need to manually measure all these traits of interest in thousands of lines (and across multiple locations). This is technically known as phenotyping. One major area of effort known as high throughput phenotyping involves improving the capacity to measure phenotype traits in a high throughput manner (many samples in a short time) with the goal of improving the accuracy and efficiency of trait measurements.

Thanks to a Precision Agriculture grant from within the North Dakota Agricultural Experiment Station, a multidisciplinary group of NDSU personnel (breeders, Agricultural and Biosystems Engineering faculty, postdocs, and students) are working on the potential application of precision agriculture tools into their breeding programs. In dry beans for example, the goal is to use a UAV to regularly collect data over breeding trials for traits such as emergence, plant height, canopy closure, days to maturity, and foliar diseases, among others. The pea breeding project is testing the utility of a UAV for assessing foliar damage in dry pea caused by Fusarium wilt under field conditions. Similar efforts are underway within the potato breeding program. The soybean program is collecting UAV obtained data of progeny row canopy closing rates as a predictor of yield.

In addition, a field robot, driving under the canopy of the crop, is used to measure traits that are difficult to detect with UAVs (e.g. pod-related traits, such as pod count per plant and stem thickness). Another use for robots is to measure the “under-canopy” temperature in potatoes, which may be correlated with disease incidence.

Robot and UAV data is used to generate preliminary correlations with the data manually recorded in those same trials.  Data from multiple locations and years are needed to develop robust prediction algorithms.

Findings of this research may also have application in other agricultural management practices in large-scale crop production, like models based on aerial observations predicting when and where to apply disease management and yield estimates during the season. 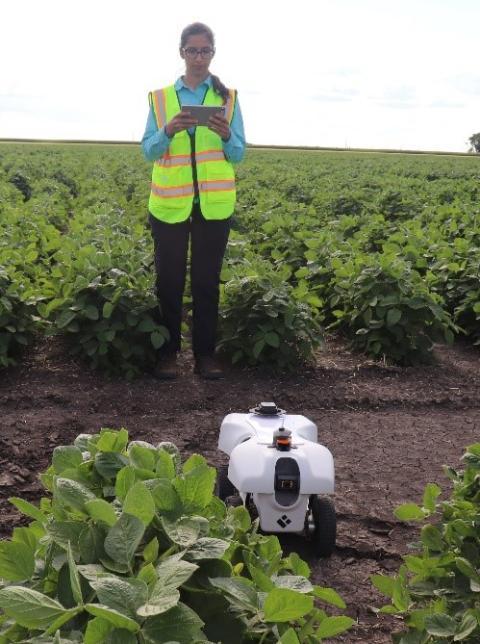 Research assistant operating a robot in a soybean breeding trial. 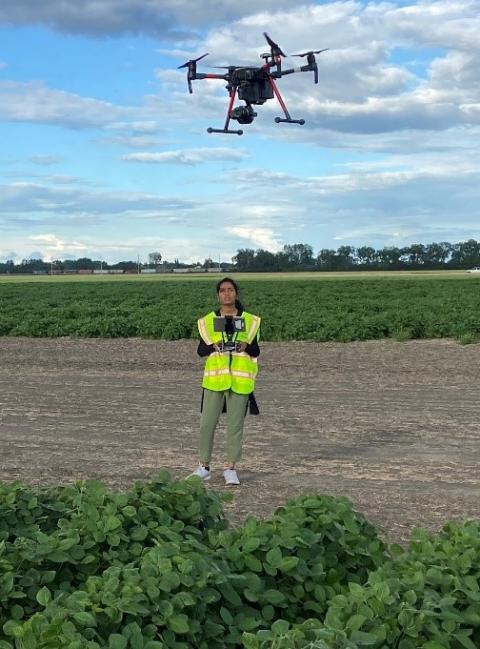 Research assistant utilizing a UAV with sensors to observe the soybean canopy.