This page was adapted from the article, "Fungicide Application on Soybean," which appeared in Crop & Pest Report on July 15, 2021.

In many crops, fungicides are applied to protect plants from plant disease. In the northern soybean growing region, the number of serious fungal diseases during the growing season are limited. However, producers have been asking about prophylactic application of fungicides at the early reproductive stages of soybean plant development. We have conducted soybean fungicide research for many years (Photo 1). Here we present a summary of the research trials.

Data from 58 replicated trials were analyzed. The trials were conducted starting in 2004 through 2020. Experiment locations included Fargo, NW Minnesota, Carrington, Dazey, Wishek, Colfax, Mapleton and Northwood. A total of 89 comparisons between fungicides and non-treated controls (no fungicide applied) were conducted. The fungicides analyzed here include Headline and Priaxor, with NIS, at various rates and applied at crop growth stages from R1 through R3. The graph 1 represents the data from 89 control plots and the yield from the fungicide treatment. 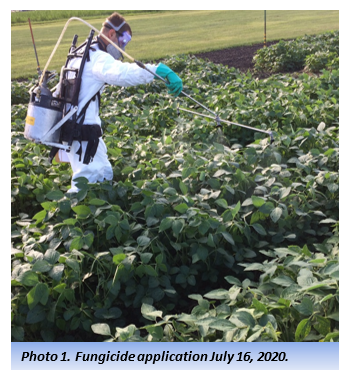 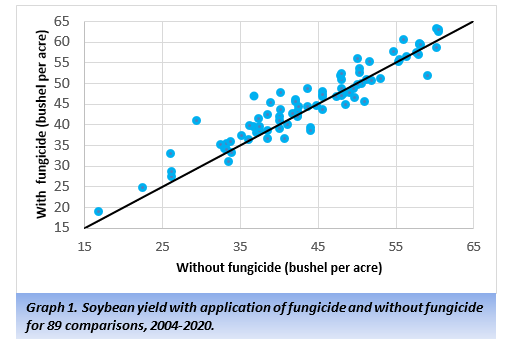 However, the yield increase throughout the study was disproportionately dependent on a few trials. The data analyzed here were extracted from replicated research plots and statistical differences could be calculated in each individual trial. A significant yield increase was only found in eight out of the 89 comparisons (9% of the time). When the remaining 81 comparisons were analyzed (without those eight significant comparisons) the yield without fungicide was 44.7 bushel per acre and with fungicide 45.5 bushel per acre, a 0.8 bushel or 2% increase.

For a fungicide application to be economical, various factors and input costs should be considered:

First - Fungicides are most likely to pay off if it manages an important disease impacting the crop. Until 2020, we didn’t worry too much about foliar diseases robbing yield on soybeans (bacterial blight is not managed by fungicides, fungal diseases were rare), and disease pressure throughout these trials were demonstrated to be low. However, frogeye leaf spot, a disease that causes yield loss in other parts of the country, was found throughout SE North Dakota in 2020. While the disease likely showed up too late in the season to cause yield loss last year, it is something growers should watch for in the future. Notably, if fungicides are being considered for frogeye leaf spot, multiple modes of action should be used.

Second - Without an imminent disease threat, agronomics and economics are critical. We have been unable to predict under which conditions a fungicide application is most likely to increase yields while disease is not a factor, but other considerations are known. The value of the crop, cost of application per acre and the cost of product per acre have to be foremost considered. The price of the crop is higher in 2021 than in recent years, but the current drought conditions are reducing yield potential.