Early Season Weed ID Samples: The Good, the Bad, and the Ugly

This page was adapted from the article, "Early Season Weed ID Samples: The Good, the Bad, and the Ugly" which appeared in Crop & Pest Report on May 19, 2022.

One sure sign that spring has finally sprung is an abundance of weed pictures submitted for proper identification. The pictures have been flowing in this week, so I wanted to highlight some of the most frequent offenders being found across the state. I decided to break these down into 3 categories: The Good (or rather, the weeds you shouldn’t worry about), The Bad (weeds that should be dealt with, but are manageable in most systems), and The Ugly (difficult to control weeds that become more problematic if not dealt with).

While we don’t often refer to weeds as good, I wanted to fit this group of weeds into my theme. Many folks would classify the following weeds as native/naturalized wildflowers, and I can’t say they’re wrong. These weeds often flower and complete their life cycle before we plant our crops. They are all currently flowering, or about to flower, and should have mature seed present before we apply burndown herbicides or till our fields. They are often found in abundance, as they seem to be filling a niche of utilizing soil resources in between annual crop life cycles. Most field prep activities will control the following plants:

Fairy candelabra is a small winter or spring annual plant in the primrose family. It is often found at high densities in fields in April and May. However, this plant will stay relatively small and will die off as the temperatures warm up. Typical seedbed preparation in both conventional and no-till will control this plant. Even if no control measures are taken, fairy candelabra will not be competitive with crops since these plants are currently nearing the end of their life cycle. 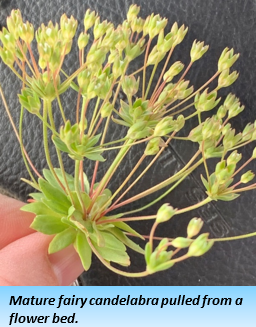 This weed is sometimes called yellow whitlow-wort. It is a native winter or spring annual plant in the mustard family. Yellow whitlow-grass germinates in the fall or early spring like many winter annuals and rarely grows more than 4 to 5 inches tall. It will produce clusters of small, yellow, 4-petal flowers that form into small seed pods at maturity in the late spring/early summer. There is a similar species, simply known as whitlow-grass (Draba verna), which has white flowers instead of yellow flowers. Both whitlow-grasses are most often confused with fairy candelabra because of the similar small appearance and unique life cycle. In some cases, whitlow-grasses are confused with horseweed, but horseweed will not flower until July or August, and whitlow-grass will be dead and gone by then. 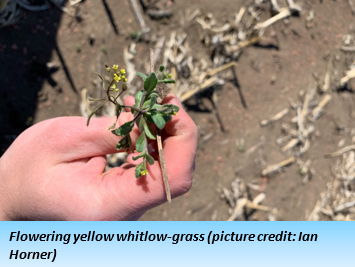 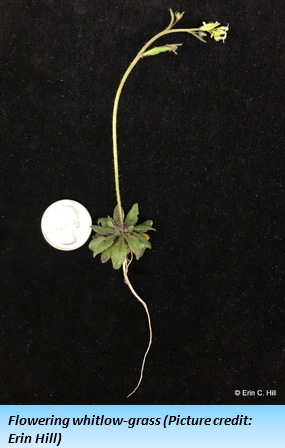 This plant is a winter annual weed in the buttercup (Ranunculaceae) family. It usually only grows to 2 to 3 inches tall and will complete its life cycle soon. The leaf shape and flowers are typical of plants in the buttercup family, but the unique seedpod/bur makes this an interesting specimen. This plant is more typically found in states to our west, but we have had some reports in fields in central and western ND. 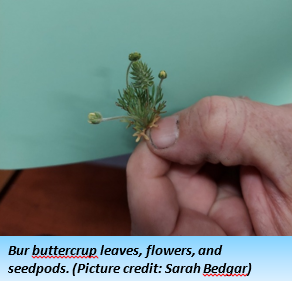 Waterpod is another weed that is showing up across the landscape this year. Though the leaf structure may remind some of common ragweed or biennial wormwood, waterpod plants are much larger and more advanced than either of those two weeds at this stage in the growing season. Waterpod will be flowering and producing seed soon and will complete its life cycle as we near the summer solstice. Like the other weeds in the Good category, typical seedbed preparation will control waterpod. 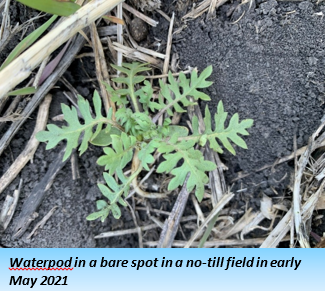 Waterpod in a bare spot in a no-till field in early May 2021.

These are a couple of winter annual weeds in the mustard family that are ubiquitous across the state. Their life cycle is a few weeks longer than the previous 4 weeds, so they will often cause early season competition with crops if not controlled prior to crop emergence. Though these plants are very common and their rosettes and white flowers can often be confused with other winter annual weeds. With the rainfall patterns of last fall, there are several dozen winter annual weeds that we can find in fields across the state that are currently bolting from their rosettes and about to flower.

Shepherd’s purse is a small winter annual flowering plant in the mustard family (Brassicaceae). Originating in Europe, it was introduced into North America favoring colder climates and cultivated ground. Shepherd’s purse is known for its heart/triangular shaped flat seed pods resembling a purse, that are found on a bolted stem that is attached to a rosette of lobed leaves. It can grow from 0.5 to 1.5 feet tall with small white flowers. 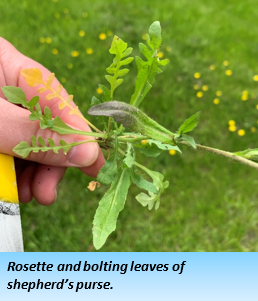 Field pennycress is a member of the mustard family (Brassicaceae). It can be found in agricultural lands and roadsides in a wide range of soil types and environmental conditions. Field pennycress is a winter annual broadleaf, herbaceous plant that begins as a basal rosette with slender taproot systems. Stems from the basal rosette are hairless and usually simple but can be freely branched towards the top. When growing in unfavorable conditions, the stem remains unbranched and may reach only a few inches in height, but in fertile soils with little competition, the main stem may grow up to 32 inches. 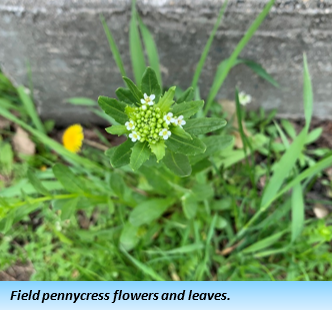 These are the weeds that will be highly competitive with crops and will persist through most, if not all, of the crop’s life cycle. These weeds don’t need much introduction, but there can be some confusion with their ID this time of year. Failure to properly ID and control these weeds now can lead to an ugly cropping year.

Our 2022 Weed of the Year is living up to its reputation as a tough early-season weed. Kochia often germinates in very dense mats consisting of numerous individual plants. These mats often appear to be dull green due to kochia’s leaf color. Young kochia seedlings are very densely hairy and will often be described as “puffballs” due to the dense hairs. Kochia cotyledons are linear. Leaves are linear to lanceolate and taper to a point. 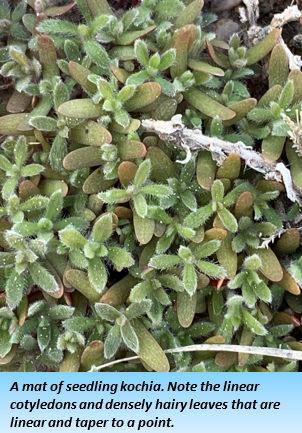 A mat of seedling kochia. Note the linear cotyledons and densely hairy leaves that are linear and taper to a point.

Our 2020 Weed of the Year is back with a vengeance. Most of our horseweed will germinate in the fall, then overwinter as a rosette, and begin to bolt in the spring. These rosettes are now bolting, but are rarely misidentified. However, the rainfall patterns this spring have enabled several flushed of spring-emerging horseweed, that can be confused with kochia. Unlike kochia, horseweed seedlings will rarely be found growing in dense mats. Horseweed cotyledons are oval shaped and easily distinguished from kochia cotyledons. Young leaves are oval shaped and become more linear as the plant matures. Most horseweed leaf margins are toothed or lobed. 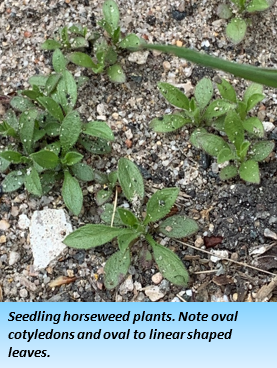 Our 2018 Weed of the year is also back with a vengeance. Many areas in western ND did not deal with this weed last year due to the drought. However, we received enough precipitation last fall to stimulate emergence of this winter annual weed. Narrowleaf hawksbeard is in the Asteraceae (composite) family. It grows 2 to 3 feet tall from a taproot, with milky sap found throughout the plant. Yellow flower heads are 1/2 to 3/4 inches in diameter resembling a dandelion or sowthistle flower. Fall rosette stage Narrowleaf hawksbeard can look somewhat similar to dandelion, however, hawksbeard leaf lobes protrude straight out rather than toward the center of the plant like seen with dandelion 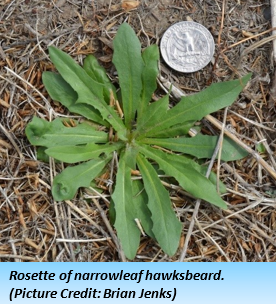