This page was adapted from the article, "Heat Crinkle is Back in Emerging Potato Plants," which appeared in Crop & Pest Report on June 23, 2022.

There have been several inquiries about potential herbicide injury to emerging potato plants. The symptoms of leaves becoming chlorotic or mosaic, not fully expanding, and having wavy leaflet margins at a glance may look like herbicide injury, however usually this is a result of heat damage to developing and emerging potato shoots. 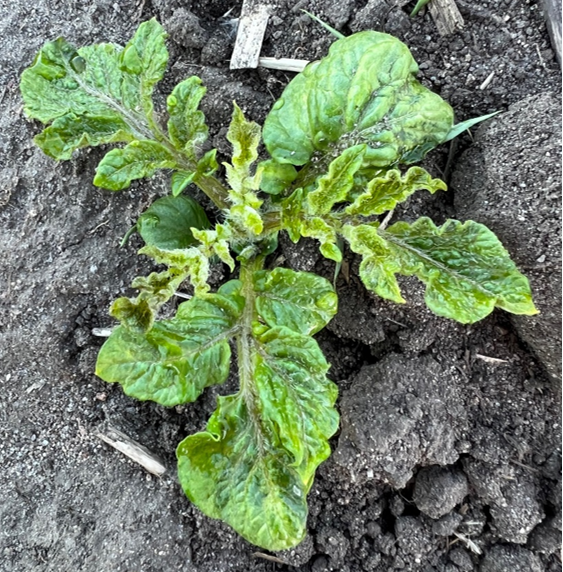 Potato hill shape, bare soil, long day lengths, and warm temperatures allow the top few inches of soils to heat up. As the potato shoot starts growth in cooler soil and grows towards the soil surface, the rapid change from cool soil to hot soil can cause injury to the developing and emerging shoots. For example, I’ve measured a differential of 60 0F soil at a 6-inch depth to 110 0F at a 3-inch. If irrigation is available, water can help cool the soil. The plants typically produce new leaves without the crinkled leaves within a week or two after heat crinkle is noticed. Some varieties (i.e. Russet Burbank) are more sensitive to heat crinkle than others.