The First 21 Days of Calving Season

A review of the advantages for calves born in the first 21 days of the calving season. 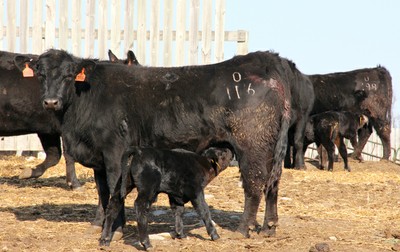 Several studies have quantified the different advantages that calves born during the first 21 days of the calving season have over those that are born later. Each day a calf is on the ground, it has the opportunity to gain weight, and the relationship between birth date and actual weaning weight is obvious: Older calves are typically heavier at weaning compared with younger calves. However, these effects extend well beyond the time of weaning.

We also begin to see impacts of early calving on the cows themselves. The pattern of late-calving cows becoming perpetually late calving and subsequently not becoming pregnant is familiar to all of us. Early calving cows are more likely to become pregnant early in the next breeding season and a recent report (Kill et al., 2012) began to quantify the impacts of replacement heifers calving within the first 21 days of the calving season on longevity in the cow herd.

The average time early calving heifers remained in the herd was 5.1 years compared with only 3.9 years for heifers that calves after the first 21 days of the calving season in 2012a group of 2,195 South Dakota producer-owned cattle. In a group of 16,549 cattle managed at the U.S. Department of Agriculture’s Meat Animal Research Center, heifers calving in the first 21 days, second 21 days and later had an average longevity of 8.2, 7.6 and 7.2 years, respectively. In both cases, data were confined to cattle culled for nonpregnancy, and other types of culls (conformation, temperament, etc.) were removed for the analysis. Taken together, this work showed that early calving heifers had at least a one-calf lifetime advantage compared with late-calving heifers.

With this in mind, producers may want to consider their heifer development and management strategies and related costs a few different ways. We are all very cognizant of the costs associated with developing heifers through their first breeding season. Producers may not wish to retain any more heifers on breeding pastures than they wish to keep for themselves to control costs.

To calculate the stocking rates of breeding pastures in this scenario, we would divide the number of replacements we are targeting to retain by 60 percent (0.60). For example, if a producer wishes to retain and calve out 50 replacement heifers, 84 heifers would be stocked onto breeding pastures (50 ÷ 0.60 = 84 total heifers). The divisor used is herd-specific, and producers knowing the proportion of heifers becoming pregnant early in their herds should anticipate accordingly. Perhaps the benchmark of 65 percent of the cows becoming pregnant within the first 21 days is achieved regularly and only 77 heifers would need to be kept.

The number of heifers mentioned above is obviously a much larger number of heifers than normally would be run on many operations. Several items are critical to the success of developing a successful system of retaining only those females pregnant within the first 21 days of the breeding season:

An additional production system utilized by some beef operations is to breed each heifer a single time via artificial insemination and not run any cleanup bulls. Pregnant heifers are kept and open heifers are sold as stockers at the end of summer or retained through the feedlot phase. In either case, both systems identify the heifers that become pregnant early in the breeding season, and both systems take advantage of the additional longevity and accumulated weaning weight that accompany these early calving heifers.

Given the lifelong benefits of heifers calving early in the calving season, producers may want to implement a system that focuses on retaining only these heifers. Before making this decision, several items need to be considered and a thorough plan developed. In addition, producers should evaluate nutrition and management decisions that offer heifers the greatest likelihood of early pregnancy.

However a question remains: Is early calving per se what leads to the benefits highlighted in the above paragraphs or is it something inherent in heifers that naturally calve early that drives the observed advantages? Whether heifers that become pregnant early only as a result of additional management experience the same benefits of longevity and calf performance as those heifers that become pregnant early without intervention is unknown at this time. Either way, I hope that you have a high proportion of heifers calving within the first 21 days of the calving season that go on to wean large, healthy calves and continue to stay in the herd for many years to come!