Symptoms of clubroot are most visible during the month of August, and we encourage canola growers in the region to scout their fields for the disease.

Symptoms of clubroot are most visible during the month of August, and we encourage canola growers in the region to scout their fields for the disease.  This is most important in NE North Dakota, where localized infections of clubroot have been confirmed in Cavalier County since 2013.  However, all canola growers should be aware of this emerging disease.

Where to scout? The pathogen that causes clubroot is soil-borne, and spreads when soil is moved.  Commonly, this includes movement by soil on equipment, in flood water and by wind erosion. As a result, clubroot is often first observed in areas where soil is most likely moved into a field, such as a field entrance (from equipment), low spots (from flooding) and shelterbelts (from wind).  Although the pathogen can be introduced into any soil, the disease is much more likely to develop and cause yield loss in acidic soils.  Consequently, suspicious areas in acidic soils should also be investigated. 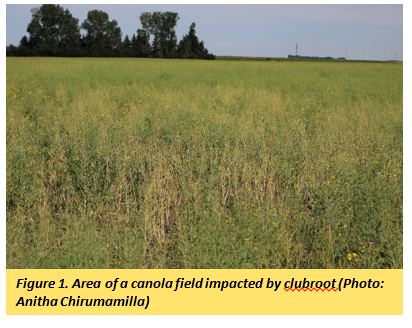 What to look for?  Field symptoms are most pronounced in August as the damaged roots struggle to obtain enough moisture to keep the plant healthy.  Damage from clubroot usually is first noticed in clusters of plants in spots or patches in a field (Figure 1). Infected plants often appear stunted and yellowed and the stand may be thin.  Roots should be examined in any area suspected of having clubroot.  Carefully dig up the roots and examine for noticeably swollen and small club like shaped galls (Figures 2-4). The younger galls may be porous and have cracks and air pockets in them.  Older roots will become brittle and may break at the soil line. 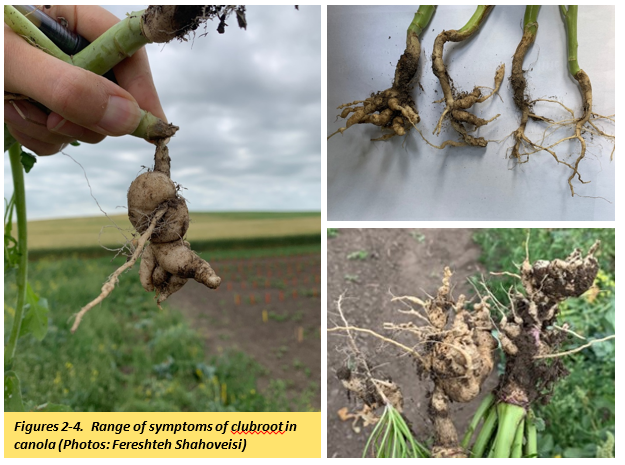 For confirmation? County Extension agents and staff at the Langdon Research Extension Center can help identify clubroot. Additionally, Drs. Venkata Chapara (Langdon REC) and Luis del Rio (NDSU campus) may be able to identify clubroot using molecular diagnostics and grow out tests from soil samples. Please contact any of us directly for more information (below).

What can we do if you have it?  Nothing can be done to manage clubroot in the growing season, but it is critical to avoid spreading the disease into new fields. If possible, wash equipment before moving from a field with clubroot into a new field.  Similarly, harvest an infected field last, if possible.  If you find clubroot, developing a management plan including clubroot resistant varieties and practicing long crop rotation will be important.