Small Grain Diseases: Management of Those More Common and Severe in Dry Years 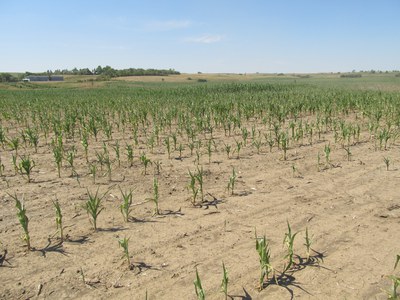 Small grain diseases that are more severe under dry soil conditions in North Dakota include wheat streak mosaic and root rot.  These two diseases add stress to the small grain plant, which is already under stress from lack of moisture and too much heat.  Wheat streak mosaic is a viral disease primarily attacking wheat crops, and is transmitted by wheat curl mites.  The two most common root rots in small grains in North Dakota are common root rot and Fusarium crown and root rot. These root rots are caused by soil borne fungi that can attack the roots and crowns of small grains.

Wheat streak mosaic: Wheat streak mosaic virus is carried from plant to plant by wheat curl mites.  Wheat curl mites are very tiny (1/100 inch in length).  Their population generally increases rapidly under extended warm dry weather, and with high mite numbers, the chance of infection of susceptible crops becomes higher.  The mite transmits the virus during feeding and the virus infection causes yellow streaking of leaves, stunting of the plant, and reduced yields.  The mite needs a green bridge for survival and frequently overwinters on winter wheat or perennial grassy weeds, and then moves from these plants to adjacent spring grains in the spring or early summer.

Mites move more frequently during heat and drought stress, seeking green, healthy plant tissue. They move to the outer edge of leaves where they are positioned for easy movement in the wind.  The wind moves them to adjacent plants or fields, where mite transmission of the virus reoccurs.  The virus disease severity is greater under drought stress because the plant has fewer nutritional and water resources to compensate for virus infection.

Wheat streak mosaic management: Wheat streak mosaic is managed by two cultural practices: elimination of wheat volunteer plants and grassy weeds with herbicides (or tillage) at least two weeks prior to planting a new crop; and use of appropriate planting dates (see below).  Each practice helps to break the green bridge needed for mite survival.

Elimination of volunteers and grassy weeds: Glyphosate and paraquat may be used to destroy hosts of the mites and virus.  This should be done two weeks prior to planting a new crop into that field or adjacent field.  If infected volunteers, grassy weeds, or even infected fields are left standing, they may be a serious source of infection.   Glyphosate acts slower than paraquat in terminating grassy hosts, and mites on these plants will move out of the infected volunteers for up to 10 days after herbicide treatment.

Planting dates: Winter wheat should be planted in mid-September, or later in southern North Dakota counties.  This reduces risk of exposure to high mite populations dispersing from infected plants during August and early September.  Green corn also may be an important reservoir for the mite and virus, and planting winter wheat next to corn that is still green increases risk of mite movement from the corn into the winter wheat.  On the other hand, spring wheats should be planted early to escape infection prior to summer mite buildup. Severe damage is most likely if the crop is infected at a young growth stage.

Common root rot and Fusarium crown and root rot management: Common root rot is caused by a soil-borne fungus, Bipolaris sorokiniana. The common root rot fungus is widespread in North Dakota soils, causing root rot of wheat and barley.  Common root rot is characterized by a dark-brown discoloration of the roots, sub-crown internode, and often the crown.  The disease interferes with water uptake and subsequently affects grain fill.  Moist soil and cool temperatures often allow wheat and barley plants to compensate for infected roots, and yield losses may not be noticed in a cool growing season.  However, early infection of roots can result in severe yield loss if the plant is subsequently exposed to high temperatures and dry soils.  A diseased root system can’t absorb enough

Fusarium crown and root rot: Root rot caused by several fungi in the genus Fusarium may be associated with very dry soils or areas that get low annual precipitation.  Fusarium root rot on wheat often is called dryland foot rot.  Fusarium root rots are characterized by a brown to reddish-brown discoloration of the roots and crowns.  Affected plants may be in patches, appearing as prematurely ripened plants.  As with common root rot, plants infected with Fusarium root rot cannot absorb enough water to carry plants through grain fill.water for the plant under these stress conditions.

Crop rotation: Crop rotation is the most effective method of reducing the risk of small grian root rots.  Non-host crops include broadleaf crops such as soybean, canola, dry beans, flax, and sunflower. If a small grain crop must be grown, oats tend to be less sensitive to root rot. Increasing the time between re-cropping wheat or barley also is effective; each additional year break from these two crops reduces the level of the fungus in the soil.

Seed treatment: A number of broad-spectrum  registered seed treatment fungicides have suppression activity against the common root rot fungus in wheat and barley.  The most likely conditions where seed treatments would be beneficial are: under continuous wheat or barley production; short rotational cycles between wheat or barley; or in soils or areas where moisture stress is likely. Fungicide seed treatments will provide early-season protection from root rots. However, their residual should be viewed in terms of weeks, not months. Further information on seed treatments for wheat and barley may be found in NDSU Extension Circular PP-622 ND Field Crop Fungicide Guide.