There are several leaf spots of corn in the United States and can be caused by pathogens, herbicide injury, physiological, environment, insects or genetic flecking.

There are several leaf spots of corn in the United States and can be caused by pathogens, herbicide injury, physiological, environment, insects or genetic flecking (Figure 1).In North Dakota (ND), we have fewer pathogen caused leaf diseases compared to other corn production regions in the USA. The leaf diseases (Figure 2) we are accustomed to seeing in ND are common corn rust, Goss’s wilt, common smut (can also be observed on ears and tassels), and holcus leaf spot. The other leaf disease that has been reported to a lesser extent is northern corn leaf blight. Of these diseases, Goss’s wilt can cause significant yield loss on susceptible hybrids in ND. Some of the biggest reasons why ND does not have problems with severe foliar diseases such as gray leaf spot and southern corn rust is due to weather and the relatively short growing season. Both gray leaf spot and southern corn rust prefer warm days (mean daily temps above 80F) and high humidity. Although ND can have a few days with these conditions, we generally do not see consecutive days (four to six days) with these conditions. 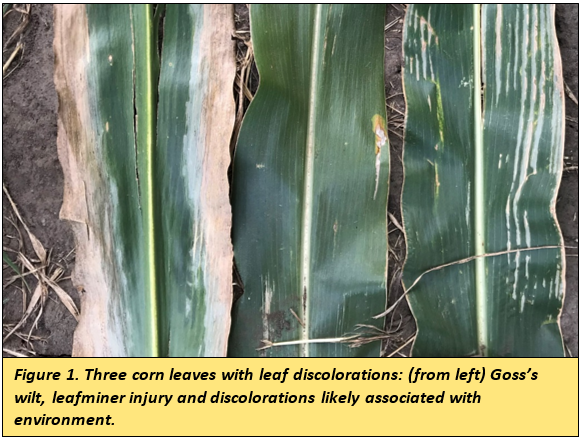 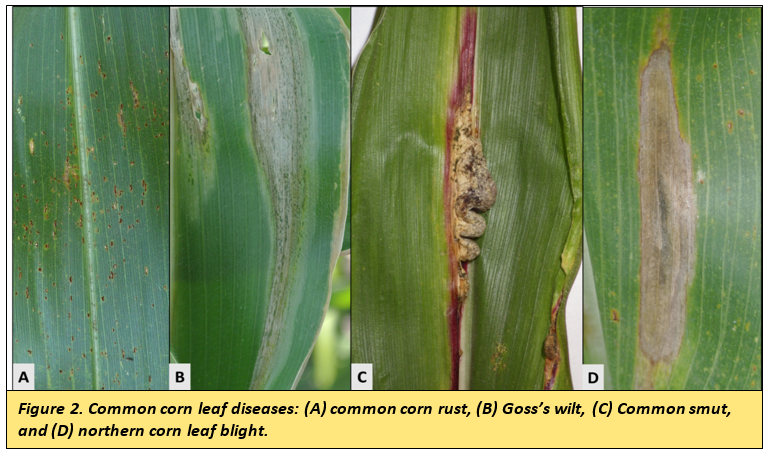 It is possible that spores of the southern corn rust pathogen do arrive in ND each year, but arrive too late to cause yield loss. Another corn disease that is causing yield losses in the US is tar spot. Tar spot was identified in southeastern Minnesota last fall and it is possible that the disease may continue to be found further west.

Over the past two weeks, several photos of leaf spots have been received with most of them being possible holcus leaf spot or paraquat injury (Figure 3). Taking notes on field distribution, plant canopy distribution and onset of disease can help determine possible causes. Holcus leaf spot (bacterial disease, not economic) generally is observed early in the season and will remain on the lowest part of the canopy. Injury associated with paraquat can be observed on the entire corn plant and will likely be most severe on areas of the field associated with prevailing winds. Paraquat injury will also have irregular lesions with no definitive shape (holcus leaf spot tends to stay oval in shape). Paraquat drift onto corn from prevent plant acres has occurred in a few locations in 2019 and 2020. Paraquat drift can also occur this time of year when it is used as a desiccant or for pre-harvest weed control. 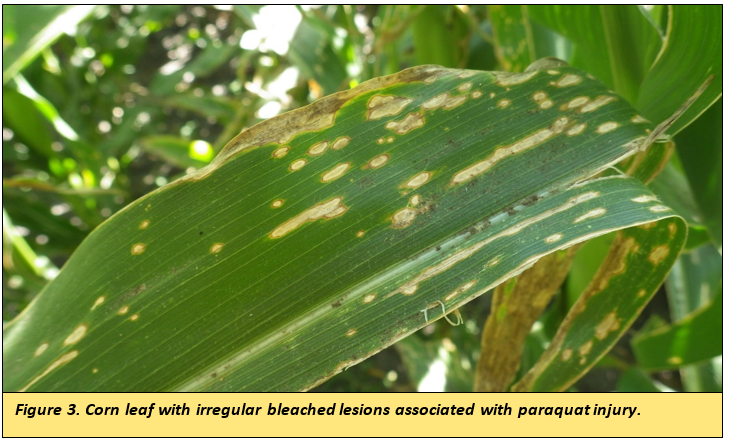