The Cost of Soil Erosion

This page was adapted from the article, "The Cost of Erosion," which appeared in Crop & Pest Report on July 21, 2021.

In extremely dry conditions, we can experience serious dust storms in certain areas of North Dakota. A common misconception is that the soil that blows is just exchanged with the neighbors, with a net result of zero loss except for the pesky dirt that ended up in the ditch. Unfortunately, the loss in soil was a lot more than what was in the ditch.

For perspective, take the Wheatland soils in Cass County and elsewhere, which take their name from Wheatland, ND, oddly enough. The 1903 Cass County soil survey describes a Wheatland soil as having 2 feet of topsoil with about 6.9% organic matter. I have had experiments on Wheatland soils in the past, and they had between 2-2.5% organic matter. This means that they have lost at least 2 feet of soil during the past 100 years. A productive soil (and these soils were certainly productive without fertilizer 100 years ago) has about 2,000 pounds per acre of P2O5 in the surface 6 inches. With a topsoil 2 feet thick, these soils contained about 8,000 pounds of P2O5 one hundred years ago. One ton of 11-52-0 (MAP) fertilizer contains 1040 pounds per ton of P2O5, at a current cost of roughly $600 per ton of fertilizer (with the N cost subtracted). This means that these soils have lost $4,615 per acre of P2O5 in the past 100 years. No one sent farmers that farmed Wheatland soils a bill for this, but the loss has meant that large amounts of phosphate fertilizers have been applied to these soils and continue to be applied for the past 70 years. In addition, 6.9% organic matter means that the soils had 4% organic carbon. Since organic matter has a 10 to 1 carbon to nitrogen ratio, these soils also contained 0.4% nitrogen in the organic matter. With soil weighing about 2,000,000 pounds per 6 inch per acre, the weight of soil in 2 feet is about 8,000,000 pounds per acre. The weight of soil multiplied by 0.4% N equals 32,000 pounds of N that has been lost over the past 100 years. At a current cost of about 50 cents per pound of N, the lost N amounts to $16,000 per acre. If a farmer had a soil today that was 2 feet thick, close to 7% organic matter, there would be little need to fertilize more than just a minimal amount of N to make a 200 bushel corn crop.

In the spring of 2021, there were some fields that probably lost an inch of topsoil over most of the field, or at least a great part of the field. There were several dust-loss events, with the worst on May 25, 2021. Given a starting organic matter content of 3%, total P2O5 of 2,000 pounds per acre 6 inches, 300 ppm K soil test, the financial loss in legacy fertilizer would have been:

The farmer will not get a bill for this, but fertilizer rates over time will need to be more than recommended to keep pace, and it will only be replaced by adding it over time, as tracked by soil test values.

There are only certain neighbors who can and do take advantage of this topsoil loss- neighboring no-till farms with standing residue. As can be seen in the image of blown soil deposits on a no-till field, the coarser particles of soil from the neighbors have nestled into the low-wind-velocity soil surface environment, increasing the no-till farmers’ fertility. I have observed over many years that no-till farmers, especially those who were first in their neighborhood to convert to no-till, have much higher soil test P values than their conventional till neighbor fields. No-till farmers do not apply more fertilizer than conventional till farmers, they typically apply less, partly because their neighbors contribute some to their fields nearly every year. 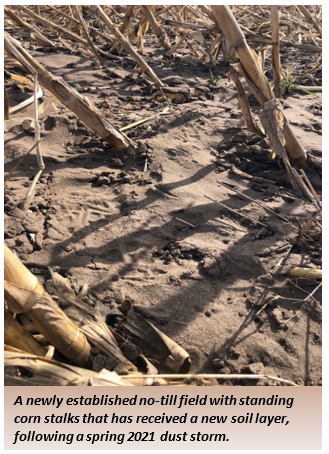