Most information on cover crops in books and even from some farmer-speakers indicate that if the carbon (C) to nitrogen (N) ratio (C/N ratio) of the cover crop is less than 30 to 1 then N will be released to the next crop.

Most information on cover crops in books and even from some farmer-speakers indicate that if the carbon (C) to nitrogen (N) ratio (C/N ratio) of the cover crop is less than 30 to 1 then N will be released to the next crop. The amount of N released to the next crop is iffy, but if the residues are incorporated, maybe half of the N will be released, and if no-till is used, probably ¼ to 1/3 of the total N may be released. There is an adage that is not followed enough in the soil fertility field: ‘If you want to be excited, do a study for a year. If you want to know the truth, do it the second year.’ There is also the meaning of ‘research’ which essentially means ‘don’t believe it until you test it’.

Several researchers in the Mid-West have conducted cover crop research over the past several years, using cereal rye and forage radish, which is the dominant cover crop mix in North Dakota.  They have found that there is no N credit from the use of these cover crops. The first published work comes from Wisconsin. The CCA readership can access this paper at https://dl.sciencesocieties.org/publications/aj/articles/110/4/1513 . Non-CCA’s can access a digest of the paper at https://www.agronomy.org/science-news/radish-cover-crop-traps-nitrogen . The bottom line was that N was not released to the following crop after growing rye/radish cover crops even though the C/N ratio was low.

At NDSU, Dr. Abbey Wick and I have conducted several years of cover crop N cycling research using cereal rye, forage radish, winter camelina and in one year mixed with field pea, and in another year with faba bean. In 2017, it took more N to grow a corn crop following a winter wheat/field pea/flax/forage radish cover crop that amounted to 2 ton/acre dry matter with an 18/1 C/N ratio, than it did to grow corn without a previous cover crop (Figure 1). 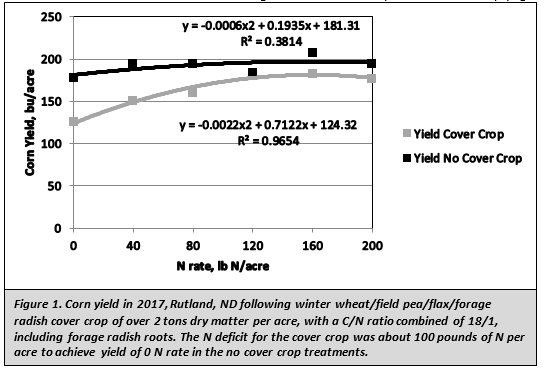 At Gardner in 2017, soybean was inter-seeded with oats and forage radish in August, with sufficient growth in the fall before and after harvest to take up about 20 pounds of N per acre. The spring wheat yields the following year showed that about 20 pounds N per acre MORE was required to achieve similar yield/protein than the no-cover crop treatments (Figure 2). 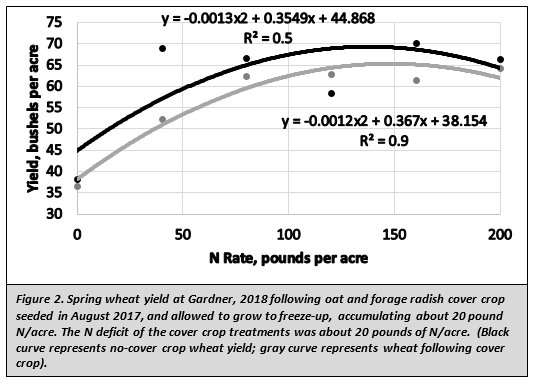 At Rutland in 2018, corn was grown following a cover crop of spring wheat/flax, forage radish, and faba bean which was established in August of 2017 and grown until freeze-up. Total dry matter was about 2 tons per acre with a combined C/N ratio of about 20. The N drag from the cover crop was about 40 pounds of N per acre compared to N required for the no-cover crop treatments (Figure 3). 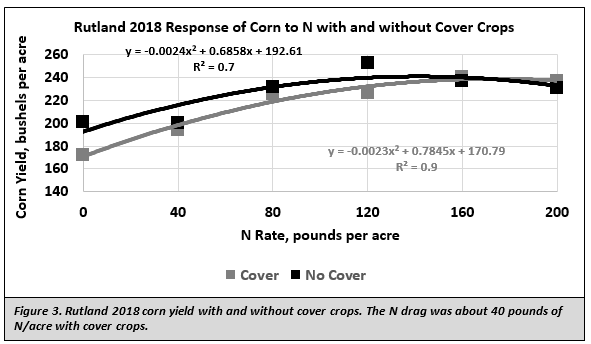 In each experiment, it took more N following a cereal rye or oat, mixed with forage radish and camelina, even when mixed with field pea or faba bean, than the treatments without cover crop. The C/N ratio in all experiments was less than that considered to release N the following year and not tie it up.

The N in the cover crop was not expressed in ending soil nitrate values. The seasons did not lend themselves to N loss from leaching or denitrification.