This publication provide guidelines for producing oats in North Dakota. It includes recommendation on variety selection, disease and weed control and fertilizer management. 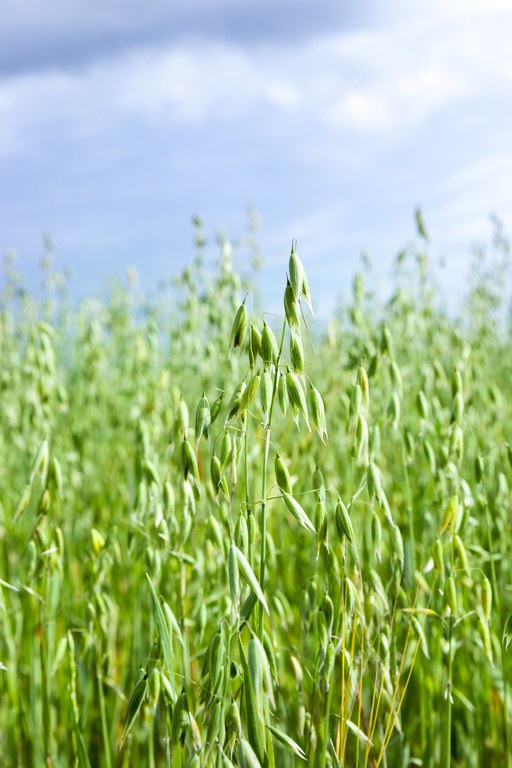 North Dakota is the leading producer of oats for grain in the U.S. However, the area planted to oats has been declining during the last three decades. Oats were grown on only 265,000 acres in North Dakota in 2018.

Typically, two-thirds of the oats planted are harvested for grain and the rest is grown primarily for forage/hay. Oats are grown in every county in North Dakota, with the major area of production in the southwestern quarter of the state.

Oats produced in North Dakota are generally of high quality, with good test weight and protein levels. Oats can be grown for the human food industry (milling), as an animal feed and for forage/hay.

Each market demands differing qualities. Knowing the market and using appropriate production practices and varieties are key to meeting the quality demanded by these diverse markets.

Oats are used in a wide range of food products, with a growing application in specialty foods due to the health benefits of oat bran. The milling market maintains high-quality standards and prefers the following characteristics:

Refer to the latest selection guide (Extension publication A1049) for the currently recommended varieties and their characteristics to assist you in selecting varieties that are best suited for the milling market.

Oats are an excellent feed for sheep, hogs, dairy and beef cattle, and horses. With the exception of the racehorse market, the specifications for oats used for feed are less strict than those used for milling. Thus, yield becomes a dominant factor when selecting varieties for this market.

Nevertheless, the following are the preferred quality characteristics of feed oats:

Kernel quality characteristics of primary concern for the premium racehorse market include uniformly large kernels with bright, white hull color and very high test weight. Protein standards usually are met by all varieties even though higher protein content is desirable.

Refer to the latest selection guide (Extension publication A1049) for the currently recommended varieties and their characteristics to assist you in selecting varieties that are best suited for the racehorse market.

Forage quality largely is determined by its digestibility and crude protein content. Oat varieties can vary for these factors.

Total energy also is influenced by the yield and maturity at harvest. Later-maturing varieties generally are grown for forage because they tend to produce more biomass. Because comparative forage yield is not routinely available, a good rule of thumb is that varieties that produce the highest grain yield will produce the greatest forage yield.

Fitting Oats in the Crop Rotation

Oats can be a good crop to include in a rotation. Oats do best when they are grown following a noncereal crop such as soybeans, dry beans, potatoes, flax and canola. Oats also can be grown after corn because they are not as susceptible to Fusarium head blight (scab) as other small grains.

Oat stubble fields are excellent for establishing winter wheat no-till because they do not carry most diseases that affect wheat. Oats also can be grown after barley or wheat with limited risk of foliar diseases.

However, a small grain on a small grain system may increase the risk of root rots and Fusarium head blight. Furthermore, the best yields will be obtained when following a noncereal crop.

The first consideration when selecting an oat variety is its intended use. Refer to the most recent variety selection guide for information from yield trials conducted throughout the state. This publication, “North Dakota Barley, Oat and Rye Variety Trial Results for 20XX and Selection Guide (A1049-XX), is available on the web.  Additional yield trial information that was not included in this publication also may be available on
the same website.

When available, use data from multiple years and locations that are representative of the soil and weather on your farm when selecting a variety. Varieties that perform well in a range of environments have a higher probability of being more productive than those that do well in only a single year or environment. When comparing the yield of hull-less oat varieties with regular hulled types, add 35 percent to the weight of the hull-less types because the hulls make up that additional weight.

In addition to yield, consider quality characteristics such as test weight, protein, oil and grain color. If you are targeting markets that will return value to producers for increased nutritional quality, the β-glucan concentration also can be an important characteristic to consider.

When selecting a variety for forage/hay, you may find additional information about the performance of a limited number of oat varieties.

The optimum period for planting is before May 15 in northern regions of the state and before the end of April in southern regions. In fields where wild oats are problematic, research has shown that wild oat severity can be reduced by planting after the first flush of wild oats have emerged and been controlled. However, this practice likely will result in yield reductions due to the effect of late planting.

For grain production, the recommended seeding rate is 1 million pure live seeds per acre (approximately 60 to 90 pounds/acre). Use a slightly higher rate if seeding deeply, late or into a rough seedbed. Higher seeding rates can offer improved competition with wild oats. However, excessive plant populations can reduce test weight and protein and increase lodging.

The percentage of seeds that germinate from hull-less oat varieties can be low because the embryo can be damaged easily during harvest and handling. Be sure to adjust for germination when calculating your seeding rate of hull-less oats. Because of the heavier bushel weight of hull-less types, the recommended seeding rate equates to 48 to 62 pounds/acre.

Oats have the ability to emerge through elongation of the coleoptile and the first internode, resulting in the crown being closer to the surface of the soil than other small grains up to the three-leaf stage. The optimum seeding depth is 1.5 to 2.5 inches. When seeding depth approaches 3 inches,

Nitrogen (N) and phosphorus (P) are the plant nutrients most often found to be deficient in this region. Fertilizer rates should be based on yield potential, a fall soil test and any expected N to be released from the previous crop. The basic recommendation for N is:

Selection of the N source should be based on cost, convenience, practicality, safety and availability. The placement and timing of application also are critical to achieving the highest efficiency possible for each product. If applied correctly, no difference occurs in the efficiency of any source of N.

Anhydrous ammonia should be applied 4 to 6 inches deep to reduce gaseous losses. If applied at seeding, the lateral distance between the center of the ammonia band and the seed furrow should be 3 inches.

Dry products broadcast on the soil surface should be incorporated shortly after their application. In no-till, subsurface applications of N are preferred to avoid large possible ammonia volatilization losses from urea.

Fertilizers should not be applied to frozen soils. Urea-based fertilizers are very soluble, and spring runoff will carry the fertilizer off site if the soils are frozen. The amount of fertilizer placed with the seed should be limited. Rates of potassium and phosphorous are determined based on the yield potential of a field and the soil test values (see Table 1).

Sulfur deficiencies may occur on sandy soils or soils with low organic matter following higher than normal rainfall. No responses to micronutrients have been observed in North Dakota.

Oats can be competitive with weeds when properly managed. Fields infested with wild oats should be avoided because no registered herbicides can control wild oats selectively in an oat crop. A number of herbicides are registered for use in controlling broadleaf weeds.

Refer to the most recent edition of the “North Dakota Weed Control Guide” (W253) available from NDSU Extension for information on registered herbicides. Always refer to and follow the label of any product applied.

Wild oats are controlled most effectively by rotating with crops where wild oat control is possible. When growing oats, higher seeding rates (greater than 1 million seeds per acre) can help reduce the production of wild oat seeds. Late seeding after the first flush of wild oats has emerged and been controlled by a preplant burn-down also can be used to limit wild oat competition in fields where wild oats are known to be problematic. However, late planting can reduce yield significantly.

Several diseases can affect the yield and quality of oats. For the purposes of this publication, only the three most common diseases that affect yield are discussed in detail. They are crown rust, stem rust and barley yellow dwarf. Oats is a host for Fusarium head blight, but reports of it impacting production or quality in North Dakota have been infrequent.

Crown rust is the most common and damaging oat disease in North Dakota.

The crown rust pathogen will not infect other small grains.

Unlike other cereal rusts, this pathogen overwinters in North Dakota and can lead to early disease onset. Additional spore sources are carried into the state by southerly winds. 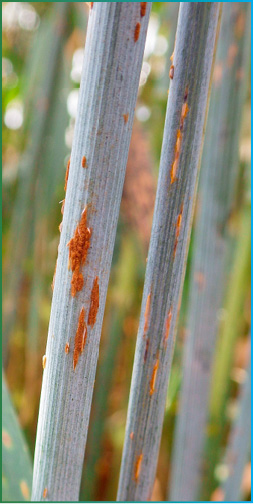 Figure 3. Symptoms of barley yellow dwarf. (A) Reddening of leaf tip. (B) Yellowing of leaf tips and stunting of plants. (Mike McMullen, NDSU)

Harvesting and Storage of Oats for Grain

To avoid losses from shattering, oats usually are swathed and threshed by a combine with a pickup attachment. Swathing of oats should commence when the kernel moisture content is about 35 percent. This is usually when the panicle has turned yellow or brown, even though some stems still may show some green, and the least mature kernels have changed from green to cream.

The swathed oats should be threshed as soon as they reach an appropriate moisture. Oats that are left too long in the field can weather and may not be acceptable for premium markets.

Combine settings should be slower and the concave wider than those used for other small grains to avoid dehulling kernels. Hull-less oat varieties are more susceptible to kernel damage, so cylinder speeds should be reduced to approximately 900 revolutions per minute to prevent damage.

Growing oats for forage requires many of the same management factors as growing oats for grain. Variety selection is one area to consider. The forage quality and yield of oat varieties are evaluated from time to time. Forage quality generally is greatest from the late-maturing cultivars.

If oats are harvested too late, the digestibility of the fiber and palatability decrease and mature kernels may shatter during the baling operation. Late-boot stage harvest is recommended when the forage is to be used in a dairy ration to help meet the high protein demands of the dairy cow.

Oats used as forage generally are put up as hay in North Dakota, but occasionally they are harvested as a haylage or for silage. The maturity stage for haylage should be the same as for hay.

The primary problem with obtaining good-quality haylage is controlling the moisture content when ensiling. Oats at the soft-dough stage will have from 25 to 35 percent dry matter, depending on the environment. Good moisture for ensiling is 60 to 70 percent.

However, haylage should have 45 to 50 percent dry matter for good ensiling, so some wilting will be required. Be careful not to lay down too much at one time or controlling the ensiling moisture content will be difficult.

Field pea/oat mixtures sometimes are used to increase hay quality. If peas are included, the seeding rate of oats should be decreased about 20 to 30 percent to allow some space for the peas. Typically, 40 to 60 pounds of peas are seeded per acre.

Pea/oat mixtures generally result in yields that are similar to or slightly less than for pure oat stands. Including peas increases the crude protein content about 1.5 percent but does not otherwise increase digestibility or reduce fiber content.

Information on variety performance and characteristics: