Corky ring spot is becoming more economically important across several potato production regions in the U.S. largely due to the spread of the virus and because of restrictions on the use of current chemical control options.

Tobacco rattle virus incidence has been reported in potato production areas in California, Colorado, Florida, Idaho, Michigan, Minnesota, North Dakota, Oregon, Washington and Wisconsin. The virus has a broad host range, including potato, tobacco, corn, barley, sunflower, ornamental (tulip, iris, etc.) and a variety of weed hosts. The virus is transmitted in the field by soil-inhabiting stubby root nematodes of the genera Trichodorus and Paratrichodorus.

Nematicides, soil fumigation and resistant cultivars can be used for nematode management. Detecting and quantifying viruliferous nematodes is important for making planting decisions and management approaches. 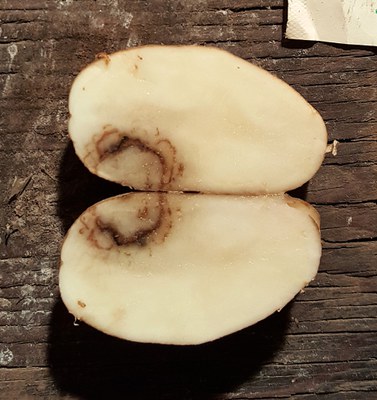 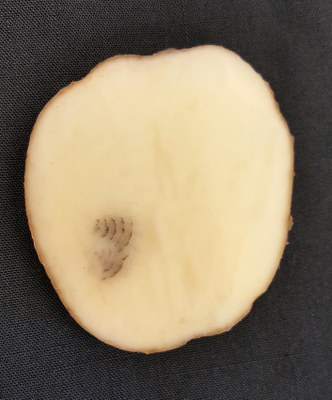 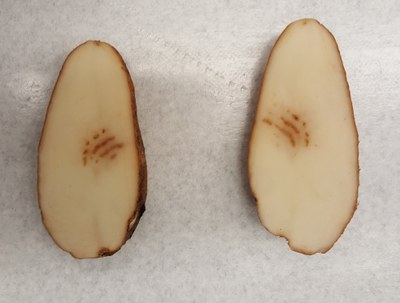 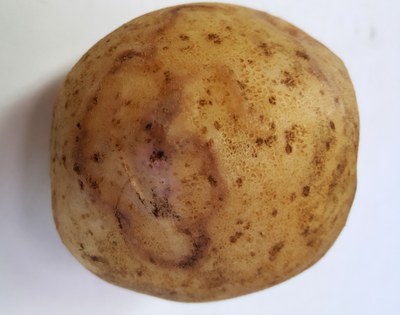 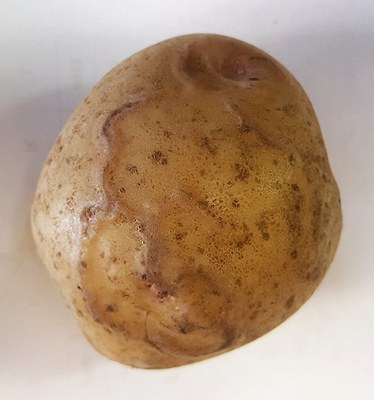 Figure 2. External arclike symptom appearance on tuber skin. These symptoms are similar to symptoms produced by the strains of PVYntn. (S.K.R. Yellareddygari, NDSU)

Important note: The necrosis symptoms in some cultivars increase during the time that potatoes are in storage. Symptom intensity varies from cultivar to cultivar (Figure 3), field to field, location to location and year to year. Laboratory analysis is the best method to determine the specific virus. 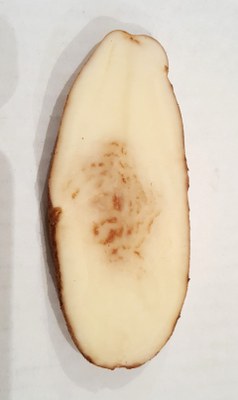 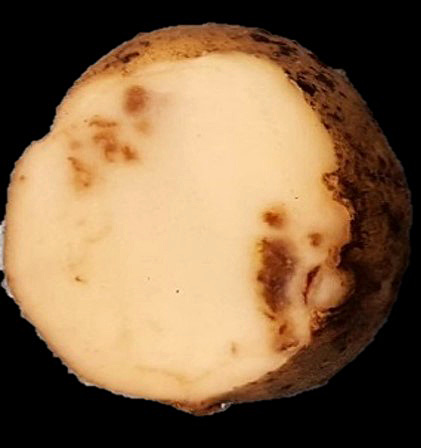 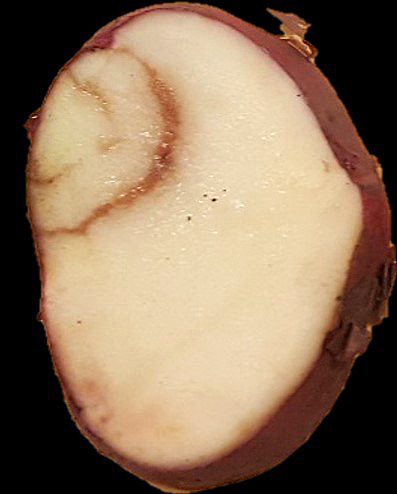 Females lay eggs and juveniles undergo four molts to reach adult stages. All stages (juveniles and adult) of nematodes feed and destruct the plant root cells by feeding on tissues while remaining outside of the plant. Adult and juvenile stages of nematode can transmit TRV when feeding on a plant root or tuber.

Tobacco rattle virus is acquired by nematodes while feeding on diseased plant tissue of potato or reservoir weed hosts. Within a field, CRS is spread when viruliferous nematodes move from diseased to healthy plants. The virus is lost during juvenile nematode molting and the nematodes reacquire the virus when feeding on roots of infected plants.

Testing for the presence of vector nematodes prior to planting is important to assist growers in making planting decisions. Soil samples can be collected throughout the year if the soil is not too dry, wet or frozen.

Collect samples at a soil depth of 12 to 18 inches and submit them for nematode detection. Based on the soil results, growers may consider implementing nematode management strategies.

Here are some strategies for reducing the risk of the tobacco rattle virus:

Table 1. Sensitivity ranking of potato cultivars to tobacco rattle virus-induced necrosis incidence based on 2015 and 2016 trials conducted in North Dakota.