We have received questions regarding what diseases are most likely to be problematic in dry/drought years.

We have received questions regarding what diseases are most likely to be problematic in dry/drought years. In some cases, drought conditions directly impact disease by making the environment more favorable for pathogen infection, disease development and/or disease spread. In other cases, drought may not directly impact the pathogen or infection, but the impact of the disease on the plants can be much higher when the crop is already water-stressed.

Damage from many of the diseases causing yield loss in dry years is not visible until mid-way through the growing season (or later), and we expect that some may begin to show soon.  Importantly, damage from diseases in dry years is often mistaken for water stress, so we have provided some information on what diseases to expect and/or look for.  Please keep in mind that the weather can change quickly! 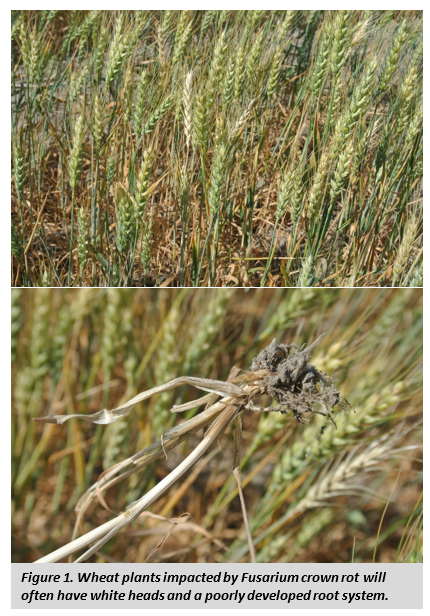 Root Rots:  Some true fungal pathogens (such as Fusarium and Rhizoctonia) do not need much water to cause root rots. And when they occur in dry years, their impact on yield is often more severe because the crop is already water stressed. While some damage is evident shortly after emergence, much of the damage may not be noticeable until mid-way through the growing season.  A good example is Fusarium Crown Rot of wheat. Although the pathogen infects early, it is not until after heading that you will see the damage on a water stressed plant (Figure 1). Alternately, fungal-like root rot pathogens (such as Phytophthora, Aphanomyces and Pythium), need lots of soil moisture to cause infection, and tend to be less severe in dry years. The exception to this rule are diseases that need sufficient moisture for only a short amount of time.  For example, downy mildew of sunflower only needs wet soils after planting to cause systemic infection, that will result in plant death regardless of the environmental conditions.

Stem Diseases and Wilts:  Stem diseases caused from soil-borne pathogens may be unaffected by drought and are likely to cause high levels of damage and wilts to water stressed plants. Typically, the greatest damage isn’t observed until later in the season and may be mistaken for water-stress and premature senescence. The most notable example of this is Charcoal rot, which impacts soybeans, sunflower and corn. A localized epidemic of Charcoal rot occurred in 2017 and 2018 in Cass and Traill Counties, and if 2020 continues to be hot and dry, we expect the disease to appear this year.

The good news, the most common (and devastating) stem and wilt diseases are heavily dependent on ample moisture for infection and spread. Thus, we anticipate seeing less white mold (Sclerotinia) on broadleaf crops in drought years (see previous article for a review on conditions favorable for white mold).

Fungal Leaf Diseases: The most dramatic shift in diseases that occur in wet and dry years are among leaf diseases. Pathogens causing rusts and powdery mildew need only brief periods of free moisture (such as dew) to infect plants, and only need wind to spread. Although these diseases may or may not necessarily be more common in drought years, the damage they cause to crops experiencing moisture stress are much worse. These diseases have the ability to desiccate a water-stressed crop very quickly. However, leaf spotting diseases that need rainfall for infection and spread are far less common in dry years. This includes Ascochyta of pulse crops, Septoria diseases of many crops (Septoria leaf spot of wheat, Septoria brown spot of soybeans, Pasmo of Flax, etc) and many others.

Bacterial Diseases: Most bacterial diseases are heavily dependent on plant wounding and water splashing for infection and spread. This is frequently associated with heavy thunderstorms, so it is logical that we may see fewer of them in dry years. While this is generally true, its unfortunately not quite that simple. A severe thunderstorm can still occur in a dry year, thus allowing a bacterial pathogen to infect crop tissue. An example of a bacterial disease that is strongly favored by severe thunderstorms is Goss’s wilt of corn.

Nematodes:  Dry soils may provide a favorable environment for nematodes.  Additionally, damage caused by nematodes in drought years is often more severe than when ample water is available. The most concerning nematode in North Dakota is Soybean Cyst Nematode (SCN). SCN can cause extreme damage in warm dry years, and will exacerbate impacts from other associated diseases (such as Sudden Death Syndrome and Brown Stem Rot). Like many of the root rot and stem diseases, the damage is often mistaken for water stress and premature senescence.

Viruses:  Viruses are not often impacted by drought. However, if an insect vector is more common in drought conditions, viruses are more likely to spread.