Effects of Bedding on Feedlot Performance, Carcass Quality, and Net Return of Steers Fed During the Winter In North Dakota

Livestock producers need to manage animals for optimum performance and net return. Feeding cattle in North Dakota poses some environmental challenges with wind and cold. Wind fence and shelterbelt protection have been proven to be effective in enhancing performance of feedlot cattle in North Dakota (Anderson and Bird, 1993). Bedding feedlot cattle is not consistently practiced, nor is there any comparative data to support its use for enhancing animal performance or capturing more nitrogen in manure. Ammonia volatilization from animal manure is considered a major pollution source in the environment. Bedding can make animals more comfortable, enhanced performance and net return, as well as improve the carbon –nitrogen ratio in manure to facilitate effective composting and greater nitrogen retention.

In the Alberta feedlot industry, bedding is considered to be a critical management tool for making feedlot cattle comfortable in commercial yards. Many ND farmer-feeders use straw for their calves and spread the manure back on cropland as part of their fertility program. Commercial yards in North Dakota use minimal or no bedding. This paper presents data on the effects of bedding for finishing steers during the past two winters in North Dakota.

Calves born and raised at the Carrington Research Extension Center were allotted to three bedding treatments in late fall of 2001 (n=53) and 2002 (n=54) after weaning and preconditioning. The bedding treatments were: No bedding, modest bedding, and generous bedding. All pens were identical in size, orientation, and water source each year with approximately 150 square feet of pens space provided per head in year 1 and 250 square feet in year 2 of the study. Steers were fed the same finishing diet (84% concentrate corn based diet) to appetite. Feed bunks were read daily at 8 AM and the ration adjusted according to intake with feed delivered between 8:30 and 10 AM. All calves were weighed every 28 days to compare performance during segments of the winter and spring. Steer calves were fed to finish weight with carcass data collected at slaughter. Economics were calculated based on feed intake, gain, feed efficiency, carcass value, and bedding costs.

Modest bedding was a minimalist approach to keeping some bedding under the calves during inclement winter weather and generous bedding was essentially double the amount provided in the modest bedding treatment. Straw was added approximately weekly with longer periods between bedding when weather allowed. Big round bales were deposited in the pens and spread throughout the bedding area with a front end loader equipped with a grapple fork. Calves had access from the bedded area to feedbunks and water fountains on concrete aprons. Data reported represents the last four months prior to market, roughly equivalent to December through March each year.

To evaluate the effects of bedding in lowering nitrogen losses in manure, 8-10 samples of raw manure were collected from each pen prior to removal and analyzed. Manure from each pen was thoroughly mixed on removal and composted for 1 to 2 months until stable and mixed again prior to a second sampling. Comparison of analysis of raw and composted manure will yield data from which to estimate the amount of nitrogen volatilized as ammonia for each treatment. This data will be reported in the future.

Data were analyzed using SAS GLM procedures with pen as the experimental unit. Normal replicated studies allot 6 to 8 steers per pen but limited pen availability and evaluation of the practicality of bedding larger numbers of animals led us to use more steers per pen. Granted, more replicates would increase the confidence of the results. Years were used as replicates as variation in winter conditions may affect need for bedding. Standard error and p values are shown in respective tables.

Table 1.Effect of bedding on feed intake, gain, and feed efficiency for steers finished in North Dakota during the winter.

*During year 2 in the last weigh period, calves in the “No bedding” treatment were moved to a different pen and given bedding as they were severely stressed by cold and wet conditions and manure tags. Compensatory gains were observed and are included in the data set.

**Actual weight gains may be lower than reported due to higher levels of manure tags on the steers in the no bedding treatment.

The least amount of tag was attached to the generously bedding animals (1.58 tag score), more tag on the modestly bedded animals (2.64 tag score), and much more (3.75 tag score) associated with no bedding. The excessive tag on the non-bedding calves added to their discomfort by reducing any protection dry hair on a clean hide provided. Calves in this group were observed to be stiff and slow to get up. Individual steer weights used for calculating average daily gains included manure tags attached to the hide which may have inflated gains slightly. 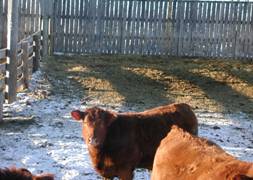 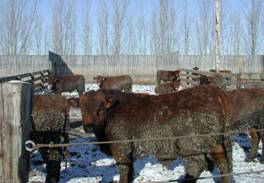 Most carcass quality traits (Table 2) were also positively affected by bedding (P<.05). Final weight was greater for both bedded treatments at 1182 and 1172 lbs vs. 1121 for steers with no bedding. Carcass weight and dressing percent improved with bedding, again affected by the weight of manure tags on the non-bedded calves. Marbling scores, the indicator for carcass quality grade, improved with bedding as did the percent of carcasses grading choice. Twenty three percent of carcasses from steers without bedding graded choice, vs. 45% and 63% for bedded steers. Rib eye area tended to increase (P=.06) with bedding from 11.47 square inches to 12.09, and 11.99 respectively for normal and extra bedding. Yield grade, fat thickness over the 12th rib, and internal fat (kidney, pelvic, heart fat, KPH) were not affected by bedding. Steers with no bedding may have improved in carcass quality with another 50 pounds of gain which would have taken several more days on feed.

Table 2. Effect of bedding on carcass quality for steers finished in North Dakotaduring the winter.

The amount of bedding varied with year as indicated in Table 3. Size of pens, number of animals, method of bedding (shredder, whole bales etc), bedding material (straw, stover, soybean residue), precipitation, southern exposure, temperature and other factors may affect amount of bedding. In this study modestly bedded steers were charged $5.77 per head and generously bedded steers $10.15. A modest amount of bedding was provided to the steers in the non-bedded treatment during the last feeding period in year 2 in an effort to alleviate severe stress and improve the hide condition prior to market.

Table 3. Bedding use and cost per head for finishing steers in North Dakotaduring the winter.

Table 4. Economic returns for bedding for finishing steers in North Dakota during the winter.

The reader must understand that there are several other factors that can affect carcass value when sold on the grid including yield grade (usually a small premium for YG 1’s and less of a premium for YG2’s. Yield grade 4 cattle often are significantly penalized in the price formula. Prime grade, Certified Angus Beef (or other premium programs) often return $2 to $9 per cwt premium.

The magnitude of improvement in steer performance and net return for bedding is much greater than other research has reported. In a southern South Dakota study, Birkelo and Lounsbery (1992) also observed a positive effect on gain, feed efficiency, and return when using 266 pounds of bedding per head in open lots. A Colorado study (Stanton and Schutz, 1996) also concluded that bedding improves gain and dressing percent in finishing steers but had no impact on feed intake and returned an extra $8.00 per head above costs. While bedding is important for the comfort of the animals and profitability for northern feeders, it may be more important in reducing ammonia volatilization from animal manure. As an added carbon source, preliminary data suggests it is effective limiting ammonia release from manure. Data from heifers managed with the same bedding treatments and the effects on bedding on nitrogen capture in the raw and composted manure will be reported in the future. 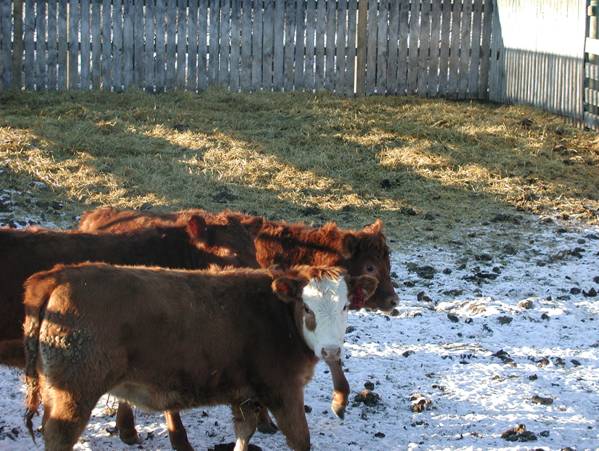