Planting Sunflower with Attention to Details

This page was adapted from the article, "Planting Sunflower with Attention to Details," which appeared in Crop & Pest Report on June 16, 2022.

Paying attention to details is very important to obtain the desired sunflower yields.

Poor seedbed conditions and planting issues may result in uneven stands of sunflower. The National Sunflower Survey, which includes North Dakota fields, pointed out that stand establishment was and still is a major problem in sunflower production.  Plants too far apart, too close together, doubles, and large gaps in the rows were common in 17% of the 1245 surveyed fields (Figure 1), and can result in reduced yield potential.  Based on observations from 2006 to 2017, the average yield of fields without limiting factors was 2,171 pounds per acre and the fields with plant spacing issues had a significantly lower yield of 1,732 pounds per acre (about 20% lower) (Hansen, 2020, page 68). 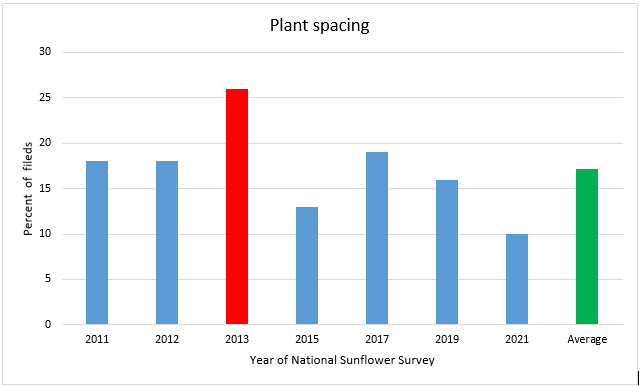 Paying attention to planter calibration and planter speed can assist in achieving a successful, uniform sunflower stand. Seed companies often have plate recommendations for all seed sizes. Variances in per-pound seed count and/or seed shape can result in significant seeding error if you do not calibrate the planter properly. Recalibrate every time when switching to a different hybrid, and even using different seed lots of the same hybrid. Sunflower should be planted at a depth of 1.5 to 2.5 inches. If you’re planting deeper, increase the seeding rate. In general plant about 10-15% above the desired final population as not all seeds will develop into an established plant. Aim for a final population of about 20,000 plants per acre for oils, and for the confection in-shell market that stresses seed size, 17,000-18,000 plants per acre. Sunflower needs to have good seed to soil contact. Because sunflower seeds have a woody hull, closure of the furrow is important. At planting, check to make sure all the residue is properly cut. Hairpinning – pushing plant residues into the seed slot instead of slicing through it – tends to be more a problem with air drills, particularly when seeding into no-till.