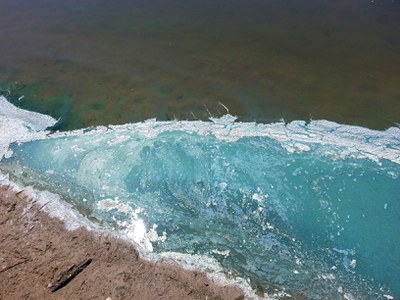 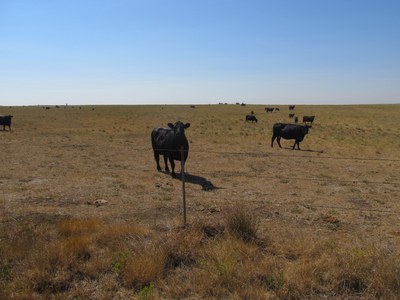 Cyanobacteria, also known as blue-breen algae, can produce toxins that are harmful to livestock, wildlife and people.

Cyanobacteria, also known as blue-green algae, can produce toxins that are harmful to livestock, wildlife and people.

Blue-green algae often occurs in stagnant ponds or dugouts with elevated nutrient levels, forming large colonies that appear as scum on or just below the water surface. Live cyanobacterial blooms can be green (but also red or yellow) and often turn blue after the bloom dies and dries on the surface or shoreline.

Some species of cyanobacteria can be toxic when livestock and wildlife ingest them. Toxicity is dependent on the species consuming the water, the concentration of the toxin or toxins, and the amount of water ingested.

Cyanobacteria can produce neuro and liver toxins. Signs of neurotoxin poisoning can appear within five minutes to up to several hours after ingestion. In animals, symptoms include weakness, staggering, muscle tremors, difficulty in breathing, convulsions and, ultimately, death.

"If cyanobacterial poisoning is suspected as the cause of death, producers should check the edges of ponds for deceased wildlife," NDSU veterinary toxicologist Michelle Mostrom says.

She also advises producers to put on gloves and collect a sample of the suspected cyanobacterial bloom from the surface of the water and deeper in the water. They should keep the sample cool but not freeze it, and submit it to the NDSU Veterinary Diagnostic Laboratory or a commercial laboratory. The sample can be evaluated microscopically for algae, or the water can be analyzed for several of the toxins at commercial labs at a higher cost.

For more information on sample collection and submission, contact your county agent of the NDSU Extension Service.

"Producers who lose livestock due to cyanobacteria poisoning may be eligible for compensation through the U.S. Department of Agriculture Farm Service Agency's Livestock Indemnity Program," says Brad Olson, a farm program director in the agency's Fargo office. "Compensation is provided for the first episode of deaths linked to a specific water source."

After that, producers must implement management practices to prevent additional losses, according to Olson. Producers also must report losses to the USDA Farm Service Agency within 30 days after the loss is apparent.