Flea beetles can cause economic feeding damage in canola and even replanting of fields. Insecticidal seed treatments are waning, and growers have made rescue foliar insecticide applications to stop further feeding damage. It is imperative to scout your canola fields daily for seed treatment failure and economic flea beetle damage. Foliar insecticide application is warranted when 20-25% defoliation has occurred on seedlings through the 6-8 leaf stage. 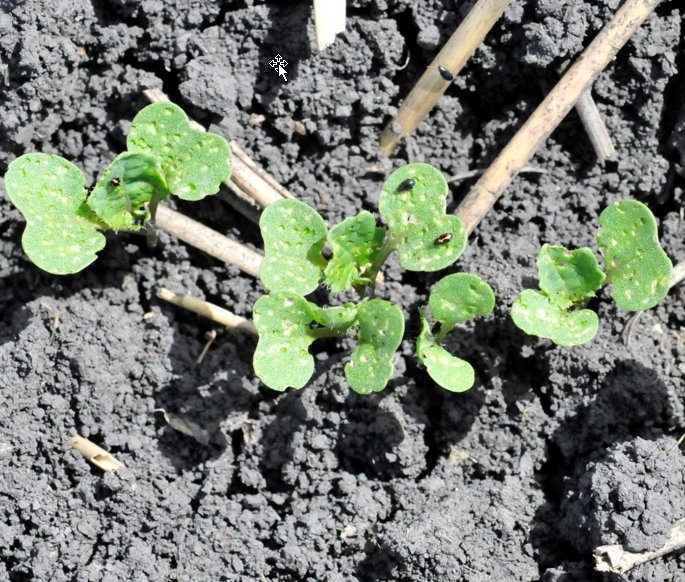 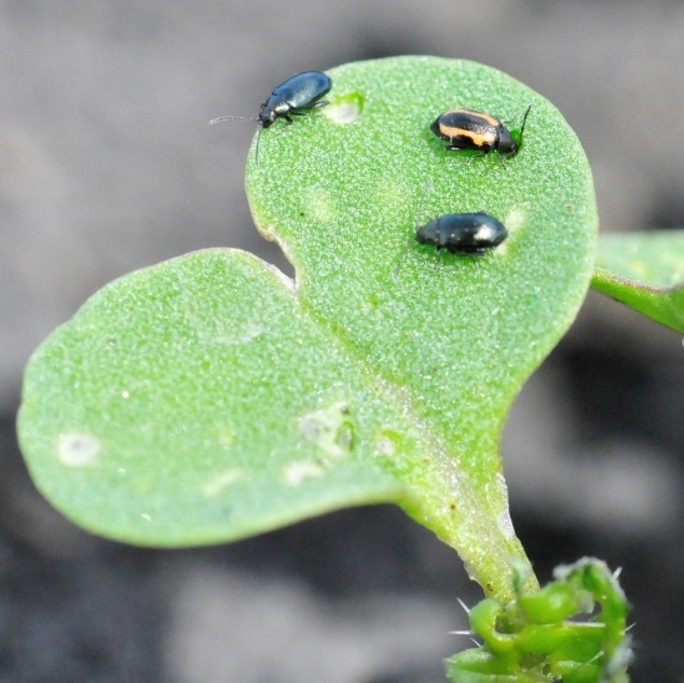 Flea beetles overwinter as adult beetles in the leaf litter of grassy areas and shelterbelts. There is one generation per growing season. Warm and dry weather can promote rapid flea beetle emergence and increased feeding activity.

When scouting, look for the presence of striped and crucifer flea beetles, and examine the cotyledons and emerging leaves closely for pitting and shotholes. Make note of which species is most dominant – current NDSU research has demonstrated that striped flea beetles are not as well controlled by neonicotinoid and diamide seed treatments as compared to crucifer flea beetles. A flea beetle population dominated by striped flea beetles could cause greater and more rapid seedling injury than a population dominated by crucifer flea beetles. A foliar treatment is warranted if 20-25% defoliation has occurred on seedlings through the 6-8 leaf stage. Foliar insecticides for flea beetle control in canola are limited to the pyrethroids:  bifenthrin (Brigade, Sniper, other 2 lb. bifenthrin products), deltamethrin (Delta Gold), lambda-cyhalothrin (Silencer, Warrior II, other 1 and 2 lb. lambda-cy products), zeta- cypermethrin (Mustang Maxx) and two premixes - bifenthrin + sulfoxaflor (Ridgeback) and lambda-cyhalothrin + chlorantraniliprole (Besiege). Keep in mind that new growth after application will not be protected, so scouting after a foliar application is a must.

Initial results from our insecticide seed treatment trials here in Fargo look promising so far. Canola was seeded on May 23 and is in the cotyledon to 1-leaf stage as of June 6. Flea beetles are feeding, and our Fargo population is about 75% striped flea beetle, and 25% crucifer flea beetle. We’re testing commercial rates of thiamethoxam (Helix) alone and in combination with cyantraniliprole (Lumiderm, Fortenza), and clothianidin (Prosper) alone, in combination with cyantraniliprole and in combination with flupyradifurone (Buteo Start). Initial feeding injury ratings show that all seed treatments are performing well with no significant differences among treatments. However, we did note slightly more feeding injury when thiamethoxam and clothianidin were used alone compared to those same actives in combination with either cyantraniliprole or flupyradifurone. The untreated check plots are well past threshold. Ratings will be done every three days to evaluate continuing insecticide seed treatment performance.