Many of us have a few tricks we’ve developed in growing a great garden. One trick is to put a scoop of Epsom salt into each hole when planting tomatoes. Some gardeners swear it prevents blossom end rot.

Blossom end rot is caused by a deficiency of calcium. Epsom salt contains magnesium sulfate—no calcium at all.

Adding Epsom salt to the soil may create more rot since magnesium and calcium ions compete for uptake into the plant. The more magnesium in the soil, the less chance that calcium will be absorbed. 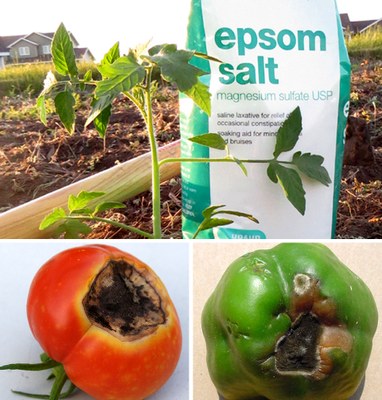 So what can we do to prevent blossom end rot?

Don’t focus on the soil. Most soils in ND have plenty of calcium.

Irrigate regularly. Avoid the extremes of waterlogged soil and droughty soil. Mulch to maintain consistent levels of moisture in the soil.

Cultivate shallowly. Don’t damage the roots of your vines. We need these roots to absorb calcium.

Avoid overfertilization, especially with ammoniacal nitrogen fertilizers (ammonium nitrate and most complete fertilizers such as 10–10–10). Ammonium competes with calcium for uptake. Calcium nitrate is a better choice.

Vines should be green but not lush. Lush vines are more likely to suffer rot since actively growing leaves take calcium from the vine before the fruits get it. As a general rule, don’t sidedress a vine until after its first fruits set. Pinch suckers.

Calcium sprays might (or might not) help. Mix 4 tablespoons of calcium nitrate per gallon of water. Spray fruits, not leaves, two to three times a week. The key time is when tomatoes are dime-sized or smaller.