What is a Blue Raspberry?

Many of us are familiar with red, purple and even yellow raspberries, but what is a blue raspberry? There are lots of blue raspberry snacks and juices on the market now. 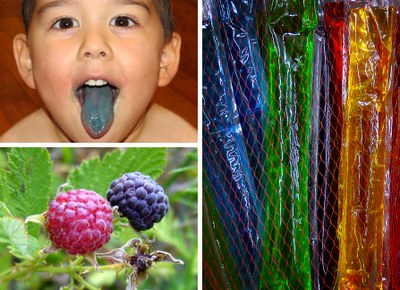 The blue raspberry originated in a laboratory, not on a farm. It started when makers of ice pops had more red flavors (cherry, strawberry, raspberry and watermelon) than shades of red dye. Kids who wanted a cherry ice pop, for example, could not figure out which red ice pop to select.

Raspberry pops originally used a dark red dye (FD&C Red No. 2) but it was later banned by the FDA as a possible carcinogen. The ice pop makers found Brilliant Blue dye (FD& C Blue No. 1) sitting on the laboratory shelves and the blue raspberry was created—along with blue tongues.

Its flavor mimics the flavor of blackcap raspberry Rubus leucodermis, a wild berry most of us have never seen or eaten (bottom left photo).

There is no such thing in nature as a blue raspberry. Even if you find a blue raspberry product with natural flavors it probably doesn’t have any actual raspberry flavor. Less expensive juices such as apple and orange are more commonly used in these products.